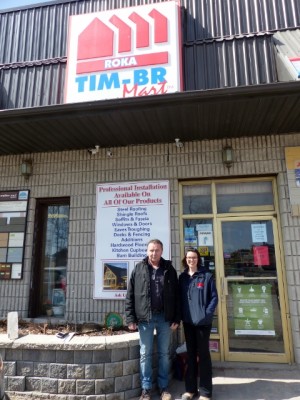 The Roka family has a long history in the business of selling wood.  In 1963, John’s father Rudy Roka began selling firewood on the side, bringing logs in from Bancroft and crown land locations in the surrounding area, eventually setting up a saw mill as well.  The property where the current TIM-BR MART location operates today on Hwy 35 just outside Pontypool was purchased in 1972.   After Rudy Roka’s early demise, son John, a licensed electrician, took the reins of the family business.

The notion of expanding into hardware was sparked by a customer purchasing lumber in 1989, who asked for nails for his project.  What kind of lumber business doesn’t sell nails?  The business was quickly transformed into a full service lumberyard.  Things went well until the recession of 1992, when despite delivering on his side of the business, Roka found himself in trouble as his contract customers were unable to pay their accounts.  With his background in trades, Roka decided to take more control over his business by expanding into installed sales, where he and contractors he hires directly complete the building and repair jobs where TIM-BR MART products are used.

In 1993, Roka joined the Homecare Building Centre group, which a few years later became the TIM-BR MART organization.  This gave Roka membership in the largest buying group of lumber and building material sellers in Canada.  The organization is owned by its 700 affiliates, which include building material and hardware retailers, commercial dealers and manufacturers.  By leveraging their buying power, the buying group develops strong relationships and negotiates volume discount prices for its dealers.  The TIM-BR MART organization claims to purchase more drywall, insulation, lumber, steel studs than any group in Canada.  As a result, Roka offers product from large reputable suppliers such as Fraser, Canwell and VicWest at very competitive prices.

Roka is unfazed by the fact that he competes with 27 other lumber yards within a half hour from his location.  His reputation and customer service has his firm delivering product within a 200 km radius, often supplying lumber for high end projects in Oakville, Georgetown and the Muskokas.  He manages this with only six employees at the 5,000 square foot store, but there are plans to expand the retail outlet into the attached warehouse space.  With almost 40% of his business stemming from projects where he controls the installation, he has 15 local trades people who he hires for specific projects, which Roka oversees.  The bulk of Roka’s business is retail, and despite his location somewhat off the beaten path, he views his store as a destination, and his longevity in this competitive market suggests he is onto something.

Roka TIM-BR MART is a full- service building supply centre, selling everything needed for home building or renovation projects, including decks, windows, garages, kitchens, siding and roofing materials.  One of their biggest selling items these days is steel roofing.  With a 50 year life expectancy and a range of styles including stone coatings that mimic the look of traditional shake and shingle roofing, this product is no longer limited to sheds and other outbuildings but is being used in expensive home projects.  Located just 15 minutes west of Millbrook, the store provides a local alternative to big box and corporate chain stores for your building needs.