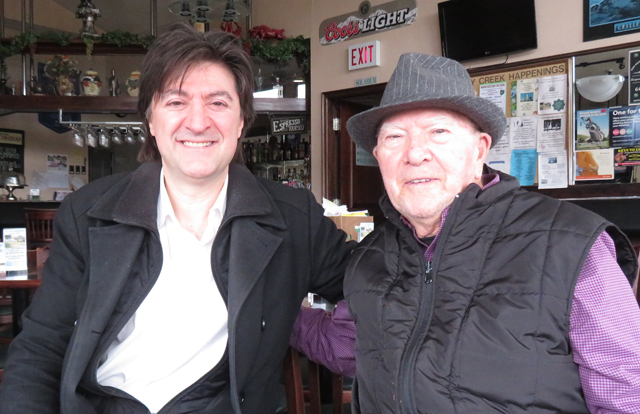 Photo Karen Graham.
Mario Veltri with his son Gino at the Harmony Creek Golf Course, a commercial development owned and operated by the Veltri family.

Before the arrival of the Highlands of Millbrook, for decades developers have been making their mark on a much smaller scale, establishing homes in this rural community north east of the GTA.

Since the late 1960’s Mario Veltri has been quietly building homes in Millbrook, purchasing new locations with the proceeds of his home sales, keeping a foot in the door in town for almost 50 years.

Mario came to Canada more than 60 years ago, when at the age of 19 he responded to a help wanted ad for a job with the railroad in Winnipeg.  He left Calabria where work was scarce, and the $.90 per hour railroad wage was enough to convince him to make the move.  After a few months, one of his friends from Italy told him about a more lucrative opportunity in Oshawa, and Mario jumped at the chance to join his friend.

With few distractions, Mario focused on earning money to bring his family over to Canada.  After working with a local builder for a few years, he concluded that the best way to make that happen was to go out on his own.  He began building homes in the Oshawa area, starting with small residential projects, which has evolved into a development company with a portfolio that includes residential subdivisions, Harmony Creek Golf course as well as a commercial development that housed his restaurant called the Capri, named after the island where he met his wife, Anna.

Business was going well, but new environmental regulations were beginning to severely limit residential development opportunities in the Oshawa area.  In the late 1960’s, Mario was approached by a real estate agent who suggested he explore Millbrook as a potential location for new opportunities.  One of the first tracks of land he purchased in the area is now known as Lisa Court where the Medical Clinic is located.  This area was about to be connected to town water services, which is one of the factors that drew him to the area.

Over the years, the size and style of home built by his firm, Marianna Development has evolved to meet modern tastes.  Mario understands his audience and his homes reflect their new preferences, offering higher square footage, open interiors and higher end finishes.  There is still a signature style to Veltri homes.  They are upscale family homes that reflect current trends modern tastes and have brick exteriors.  Many of them are bungalows, a style he believes is timeless.

The most recently completed Veltri development in Millbrook sits on the south side of Frederick Street, where one home remains on the market.  There is an old-fashioned pride in this builder, who is known to drop in during Open House events to deliver personal tours of his properties, explaining their virtues to potential buyers.   On moving day, he sometimes delivers a bottle of wine to the new owners.

Now in his late 80’s, Mario has passed along the bulk of the day-to-day building activities to his son Frank.  All family members play a large role in the management of other parts of the family business.

Of course, Mario did manage to bring many members of his family  to Canada.   Like many immigrant families, the Veltris arrived in stages thanks to the hard work and determination of a single family member who scouted out a new home and found a way to build a new life for his extended family.  Along the way, Mario built a successful business that continues to support them today. KG