The Good, the Bad and the Pastry 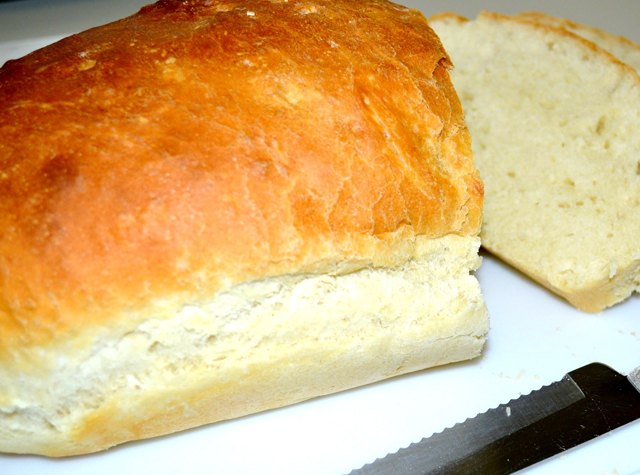 Several years ago, I found myself in a state of financial hardship.  Desperate times called for desperate measures and I resorted to an unexpected coping mechanism to endure the situation.  I didn’t turn to substance abuse, crime or reality television.  I became a serial baker.

A good friend gave me a half bag of atta – wholemeal wheat flour – and taught me how to make Indian chapatis.  Little did she know, those flatbreads would change my life.  I was hooked on them immediately:  they were such a cheap and nourishing way to feed my family.  Soon I stocked up on other baking ingredients in bulk and expanded my production to include homemade naan and tortillas.  I revisited comfort foods from my childhood like muffins, biscuits, popovers, and scones.  I added my grandmother’s bread recipe to my repertoire.  A farmer of simple means, she had never fed her family a slice of bread that did not come from her own oven.

When I think back to that time, it was as if I had stepped into some old Western movie, A Fistful of Flour, or maybe, The Good, the Bad and the Pastry.  I had transformed myself into a kind of culinary gunslinger.  At every meal, I would stand at the kitchen counter with my hands on my hips ready to demonstrate my quick draw, except instead of pistols at the ready, I had flour, milk and eggs.  I was armed to supply whatever my children hungered for.  “What’ll it be boys,” I would murmur steadily, eyes narrowed Clint Eastwood-style at my kids across the kitchen.  “Pancakes, flatbread, cornbread, soda bread, Dutch babies, crusty rolls?”  Then, throwing in a little Dirty Harry, “Go ahead, make my day.”

We lived hand-to-mouth like that for about two years while I rebuilt our life.  Baking became more than an economic necessity:  it was a creed.  Every knead to the dough let go of what did not serve us.  And everything always turned out alright when I gave it enough energy and time.

Finally, one morning, I opened the kitchen cupboards before school to find them mostly empty.  There was nothing left but enough basic ingredients to make a few pancakes, an unwanted can of pineapple rings and a bag of shredded coconut.  The larder was bare.  I had been outgunned.

I woke my kids for school and proceeded to make the pancakes as slowly and ceremoniously as you would expect for a last meal:  a requiem for a way of life that had not been sustainable.  I fried the pineapple rings in a bit of butter, crowned the pancakes with them and reduced their juice to syrup which I poured over top, dusted with toasted coconut.  The boys ate enthusiastically and I bid them off to school, then sat down at my laptop with my face in my hands.  This was it:  we had nothing.  After two years of fighting, I had finally been outdrawn.  I had no idea where our next meal would come from.

I don’t know how long I sat like that before I heard the familiar ping of an email hitting my inbox.  It was my landlord, who lived in Ireland.  I’m so sorry, she had written, but I waited too long to deposit your e-transfer for the rent and the bank has cancelled the transaction.  They’re putting the funds back into your account.  You should see the money there anytime.

I stared at the email incredulously, then logged into my bank account online.  Just as she’d said, there was my own money back in my hands:  a month’s rent and certainly more than enough to stock our cupboards.

I’m so embarrassed to be causing you this inconvenience, my landlord’s email went on to say with unnecessary contrition.  Please don’t rush to re-send the funds.   I want you to keep that money as long as you need it.

I kept the money for four days.  That was long enough for a client to pay their overdue account and, thankfully, we had dough again.  Shortly after that, I formed an alliance with another law firm that brought me complex cross-border work for clients around the globe, most of which I could do from my home office in overalls and an apron with a loaf of bread rising in the background.  I never went back to working around the clock, as I had done for so much of my career.   It gave me too much pleasure to provide our daily bread.  At some point, it had become as important to me to be our bread maker as our breadwinner.

My boys still ask me to make the pancakes.  “You know, Mom, the ones you made when we had nothing.”  I try to replicate the act using fresh pineapple, whole chunks of coconut and real maple syrup, but somehow, it never tastes as good as it did that first time.

Since COVID-19, I have noticed a shortage of large bags of flour at Foodland.  I don’t mind.  In fact, I take this as good news:  others are joining the creed.  Better days will rise up with enough energy and time.  And when our children ask us how we got there, we can tell them it was with blood, sweat and baked goods.