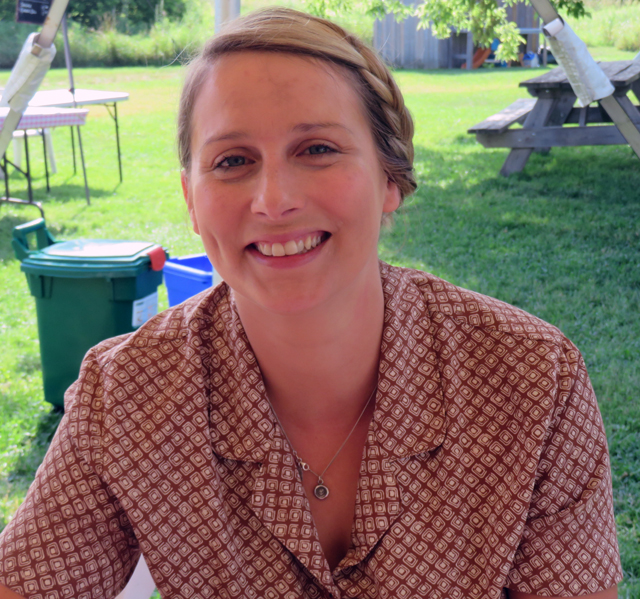 Set in 1937, in the hamlet of Carmel just south of Millbrook, the play is the third in the Barnardo children play series and follows the struggles of the White family as the try to hold onto the farm during the Great Depression.   Like the July production, Bloom, A Rock and Roll Fable, this play relies heavily on music and dancing, which is why Director Kim Blackwell reached out to Melissa Payne to audition for a key role in this production.

Melissa is a seasoned performer, well-known in the local music scene and beyond.  She began fiddling at an early age, receiving mentorship from the Leahy family as well as Natalie McMaster.  She also plays the guitar and performs solo or supported by her band which now sometimes includes fellow 4th Line performer Kate Suhr.

While she is no stranger to the stage, this is a new venture for this talented professional, and at first Melissa was intimidated at the idea of acting.  She has no problem remembering lyrics- after all, she wrote them.  But could she remember her lines in the play?  In her role of Audrey Barstow, Melissa assumes a significant role as the aunt of the 13 year-old star, Asha Hall-Smith.  Luckily, providing maternal support to this talented youngster comes naturally for Melissa, as she babysat Asha ten years ago when providing day care services in her day job in her early years as a professional musician.  Her nerves have subsided somewhat since rehearsals for the play began in earnest:  Melissa now sees her role in the play as just another performance.  Like many actors, Melissa is naturally shy, but does not experience typical stage fright at the beginning of an event- hers comes later, as she re-examines what happened on stage after the fact.  This does not lead to restful nights!

A few weeks into rehearsal, Melissa is getting comfortable with her role and appreciates the team spirit at the theatre.  There are no divas there; everyone is working to make the audience’s experience first rate by bringing the play to life.  She is also appreciating the regular hours.  A musician’s life tends to be erratic, with gigs in different towns, late hours and surprises to overcome at different venues.  Due to Melissa’s musical success, she has earned more comfortable conditions with earlier hours opening for well-known bands including Blue Rodeo, and performing at music festivals.  With two albums under her belt, this fall she returns to the music scene full time with the release of her third one entitled Darker Than Your Dark.

Carmel is another personal tale for Robert Winslow, which developed from conversations with his late cousin Harold Lunn who described the challenges endured trying to hold onto the family home during the Great Depression. Through the play, Winslow takes the opportunity to honour the rural experience and follow his fictional creations into a new era while reflecting local realities of the time.   A country girl and storyteller in her own right, Melissa is quite at home fleshing out this family tale and making full use of her many talents in the process.  KG