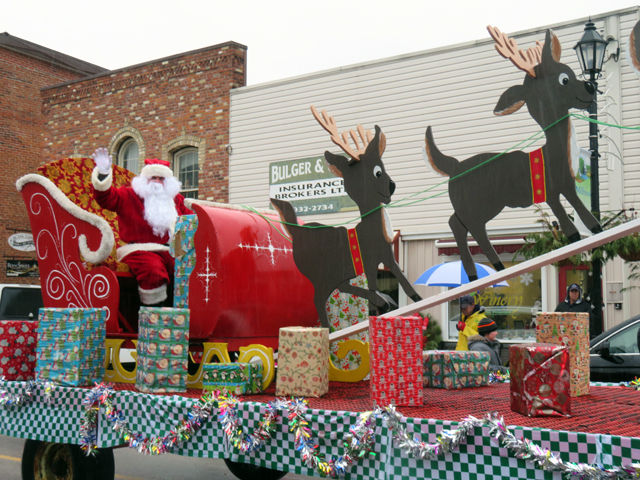 Despite solid driving rain, members of the local Lions’ Club were there helping to keep the Christmas spirit alive.  Led by President Paul Holder and his lovely wife, Bette, Lion Dr. Larry Smith, new Lion Garnet Brenchley (welcome Garnet!), Sharon Dickenson, Kathy Lycett, and  John French, the Lions sang Christmas carols in the key of “C” (for cold!).  Lion John French counts Santa himself among his admirers, having graciously allowed Santa to store one of his many back-up sleighs in his large and dry barn all year long.  It was from this very sleigh that the happy carollers serenaded the onlookers.  Adding to the festive air of the day, Lion David Goode and Lion Steve Paul handed out candy to the young and old who lined the street for the festivities.  A special thank you to long-time Lion (and former Lion of the Year), Ray Porteous, for the generous use of his time and truck to pull the float.  Thanks also to Lions Andy Stevenson, Dave Earl and Norma Gillis for their hard work behind the scene, assembling the sleigh and loading the trailer and decorating the float.

For many years, these Lions’ Club members have given freely of their time and abilities always with good will and good humour.  Despite the wet, cold weather, the Lions enjoyed getting out with their fellow citizens to wish them a Merry Christmas and blessings of the season.