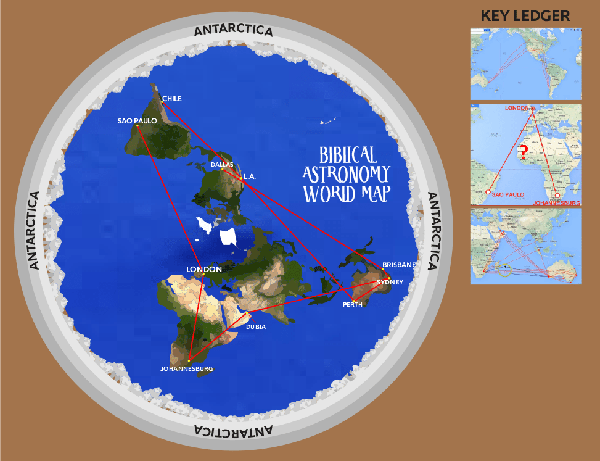 Illustration supplied.
Flat Earth: Welcome to the Frizbee we call home. At least some do. According to them the oceans don’t spill over the edges because there’s a tall ring of ice around the flat Earth’s outer edges. So what’s on the flip side of the pancake we call home? Conveniently, nobody knows.

To be a fact something has to be proven time and time again with the same end result. Gravity is a fact. You can prove it once by jumping off a tall building. Or numerous times by dropping eggs on the floor.

So where did the term “alternative fact” come from?  Donald Trump’s Whitehouse Councilor, Kellyanne Conway aired this weaselly little “lies in disguise” during a Meet the Press interview two weeks after Trump’s inauguration. It’s just a spin doctor’s attempt to glorify an “alternative opinion” by calling it an “alternative fact.” The two are very different.  Yet the fact is we’re seeing more and more outrageous alternative facts popping up every day.

Where did all this current nonsense about the Earth being flat come from? We have pictures from space that show our home planet as a ball. Ancient Greek astronomers knew the Earth was round when they watched its curved shadow creep across the Moon’s surface during a lunar eclipse. Satellites orbit the Earth so it’s not just a disc.

Nonetheless we now have celebrities like Shaq O’Neal, rapper B.o.B. and NBA star Kyrie Irving telling us an alternative fact. They believe the Earth is flat. Their reasoning ranges from “it looks flat to me” to NASA conspiracies and “pictures from airplanes make the Earth look curved because the plane’s windows are curved”.

And here’s my favourite flat Earth believer’s alternative fact about gravity. “There’s really no such thing as gravity, it’s just dark energy pulling the Earth up. You feel it sort of like being pushed back in your car’s seat when you accelerate.”

I guess the Moon must be flat and dark energy is pulling it up too, but not quite as fast because you weight less on the Moon. But if that’s true, why isn’t the Moon way behind us? And why can we still see Jupiter and Saturn because dark energy must be pulling them up faster. After all you’d weigh a big bunch more on either of those planets.

The problem is, celebrities have opinions and fact-based or not, their opinions carry weight with the public. Turn them loose on Facebook, a TV talk show or their Twitter followers and you have a built-in audience of believers.

Maybe it’s just a fad, like having a dog you can fit into your purse. What worries me – no scares me, is that rather than think, people just accept. After all, it is a lot easier than asking questions. Couple that with the vast network of social media and you can transmit a lot of garbage instantly.