Harvest Community Park Closes in on Fundraising Goal for Phase 2 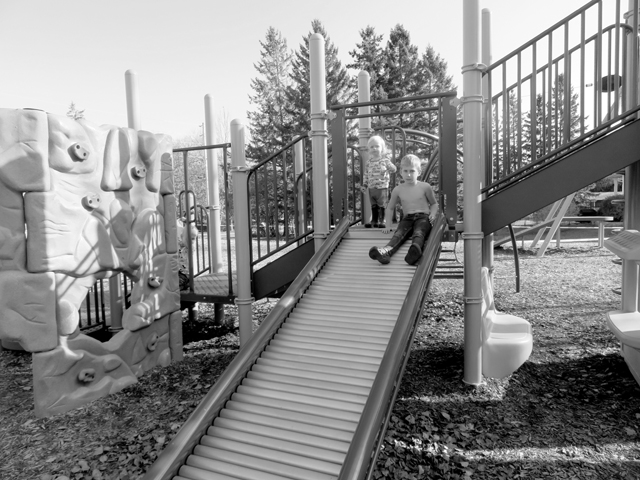 Photo Karen Graham.
One playground visitor last Friday felt the weather warranted a shirt-free ride on the slide. He and his siblings from Bailieboro were having more fun than his expression indicates. The playground was funded in part by the Government of Canada’s Enabling Accessibility Funds.

In July, the Harvest Community Park was open for play.  With an aggressive budget of $185,000, the project was not without its challenges, but the congregation of Millbrook Christian Assembly remained steadfast in their plans to create a play facility in the west end of town that was accessible to children of all abilities.

The fundraising was kicked off with a $10,000 donation from insurance giant Aviva, and some thoughtful grant applications raised an additional $91,000 from the government of Canada’s Enabling Accessibility Funds.  With $116,500 raised towards their goal, last September organizers pushed forward with the plan, breaking the playground project into two phases.  Equipment for Phase 1 was ordered last November.

The arrival of COVID delayed the project, but in July the equipment for Phase 1 arrived.  The timing of its installation seemed providential: it was completed on July 13th and that weekend, the province allowed playgrounds to re-open.  It was an instant hit.

The playground draws families from the neighbourhood as well as surrounding communities.  Pastor Mark Smallwood’s wife Christina Smallwood explains that as soon as school is out, the playground is swarmed by children of all ages, with usually ten cars in the parking lot.  Chairs around the perimeter encourage mothers to chat while their children play.  Just as the project organizers envisioned, the facility is helping families create bonds.

The equipment for Phase 2 has a price tag of $58,000.  The fundraising tally is currently $10,000 short of this total and the organizers are keen to reach their goal over the next few months.  In order to retain their quote, they must order the equipment by the end of the calendar year, or face a price increase of between 10 and 20%.

Many of the playground fundraising events were cancelled due to COVID, including a spring tea, a craft market and an outdoor concert.  This means the organizers must rely on direct donations from the community in order to complete the project.

Donations to the park flow through the church and are tax deductible.  They can be made by cheque sent by mail to 71 King St. West, using Harvest Community Park on the memo line of the cheque, in person at the church during office hours or by e-transfer to give@millbrookchurch.ca with the words Harvest Community park included in the message along with contact information for tax purposes.

Park organizers are excited about the completion of phase 1 of Harvest Community Park and encouraged by how well it has been received by the community.  They are grateful for the generous donations of local businesses, organizations and community members, as well as the federal grant from the Enabling Accessibility Fund, and a grant from AVIVA Canada for making this possible. KG