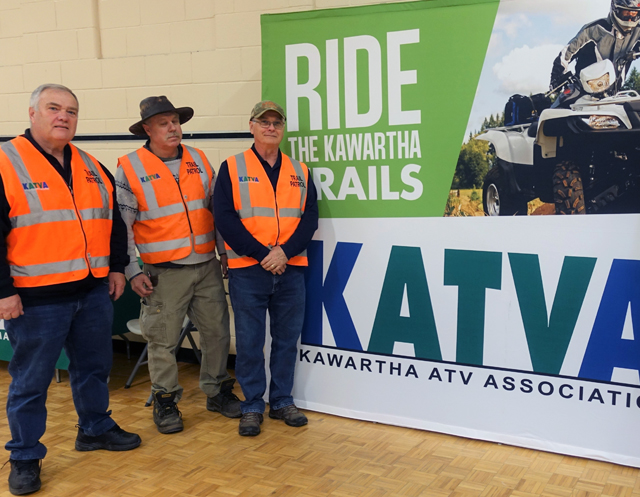 Photo Andy Harjula.
KATVA members explained their program to the public and answered questions about their organization at last month’s open house event.

Members of the Kawartha All-Terrain Vehicle Association, KATVA held an Open House in the municipal gym on November 23rd to explain their program to the public and to answer questions about their organization.

Addressing the issue of noise complaints, Association President Carolyn Richards suggested that in areas like Fenelon Falls where it was legal to drive ATVs in town, noise complaints did not exist because riders can drive slowly.  Conversely, in areas where it is illegal to ride ATV riders, drivers race so they can quickly reach their connecting legal trails.

Local realtor Gary Otten joined Carol in explaining that the Association’s goal was to allow local residents with ATVs to access the proposed trail and local commercial establishments from their homes. This would negate the need to trailer their ATVs to parking areas at trail heads.

Carol and the Trail Patrol members present emphasized that on a busy day, they would monitor, at most, 105 ATVs. Everyone present agreed that there were no great numbers of ATVs driving about. When asked about their membership, Carol stated that the club had 1700 members from all over Ontario. The geographic parameter was limited north to Bancroft and Orangeville.

There were no public members in the meeting room to interview regarding their views on the proposal to allow ATVs on the local roads, due to the fact this interview was held in the last half hour of the Open House. Carol indicated they were able to talk to about 50 people during the Open House event.

On several occasions the members mentioned that ATV riders wish to patronize local businesses such as restaurants and gas bars. According to Gary, “the club was being penalized by some people who were espousing stories that were not true.”

KATVA’s next Open House will be held at the United Church in Bethany, starting at 9 am on Saturday, November 30th.