Born in China is a movie that the whole junior division (grades 4 to 6) went to see in theatres on the April 25. The film was about 3 animals. The animals were pandas, golden monkeys, and snow leopards. When I watched it I felt happy because the animals were fantastic and cool to watch. It was a documentary based on animals. The narrator was the voice for the animals and he tried to give each animal a voice. For an example the narrator spoke for the golden monkey when he was cold and his family was not letting the monkey cuddle with the parents and the monkey’s baby sister in the winter. “My parents were giving all the attention to the baby sister,” said the narrator as he spoke for Tata the monkey. I hope you have the experience of feeling happy while watching this movie.

Hello community! Today I would like to talk about our Grade 3 and 4 classes at Millbrook South Cavan School. We all went to Camp Kawartha. It was the most wonderful 5 hours of school experience of most of our lives. We did a First Nations’ scavengers hunt, we learned about bees and pollination and we saw a presentation on water pollution. We also learned to help and grow our community more every day. I have never been to Camp Kawartha before so it was very interesting and fun first experience. I also want to thank Camp Kawartha for letting our Millbrook South Cavan to come and have a great time.

As June nears, the grade eight students are getting more and more restless. Thinking about their trip to Niagara Falls makes them feel so excited. They are raising money through popcorn sales at school as well as pizza and popcorn orders for each person in grade eight, to hand out to family and friends. The grade eight students and their parents have already had an information night, permission forms sent home, and have paid the $75 deposit to secure a hotel and transportation for the two days. Now they are just waiting for the exciting day, and some more payments to come.

On Monday March 20th, Mrs. Sturgeon’s, Mrs. Gemmetti’s, Mr. Conlin’s and Mrs. Steffler’s class moved into their new classrooms. When you walk into the school near Mrs. Monti’s class there is a new hallway. If you walk down the hallway you will see four classrooms. One of the classrooms is Mrs. Sturgeon’s (Grade 4) classroom beside it is Mrs. Gemmetti’s (Grade 4/5) classroom and at the far end is Mrs. Steffler’s (JK/SK) class. All of the classrooms are really nice. They all have smartboards and really big windows. The smartboards are a little bit different than before. Now you only get one pen and four different colours the colours are blue red green and black. The new classrooms have a horseshoe table, stand up desks and new computers.

Come to the Millbrook Fun Fair!

Hello Millbrook! This year at Millbrook South Cavan we are having the traditional Fun Fair for 2017! Come join us at Millbrook South Cavan School on Friday May 12th from 5 pm until 8 pm. Every year at Millbrook South Cavan each class has a basket theme and students are asked to bring in related things to their class’ own theme. At the event, you put your name on a ballot for a chance to win the basket. Millbrook South Cavan will use the money for things like funding for classrooms activities, technology purchase and graduation activities. The Lions’ Club will be providing dinner (hamburgers, hotdogs and sausages) for a cost. Snacks like chips, popcorn and candy floss will also be available for purchase. This year’s theme we will be celebrating Canada’s 150 Birthday. There will be activities like a jumping castle in the gym, and games in classrooms and outside. At the front entrance homemade treats will be available for purchase and there will be plant sale too.  The new school wing will be open for people to see and we hope the daycare will also be open for people visit after 6:00pm.   Hope to see you there.

Hey Millbrook, we’re having annual track and field tryouts for grades 4 through 8. They will take place at Millbrook South Cavan on May 2nd. The top three students in each event will join Mrs. Steffler and Mr. Conlin at TASS to compete against other schools. There will be some parent volunteers for the event along with teachers. Tuesday May 2nd will be a fun day of running, jumping and throwing.  Hope to see you there!

The Junior Boy’s floor hockey tournament was good for Millbrook and bad at times. Millbrook went 1-3-1 meaning they won 1 they lost 3 and they tied 1.

Mr. Conlin liked the boys’ effort and the team had a lot of fun during the games and when they were not playing.

There were two highlights of the Junior Boy’s floor hockey tournament. The first occurred when Riley Buck scored 2 goals in the last 2 minutes of play. The second happened when Ryan Pillman got 2 goals in 1 game but 1 of his goals was a tip in from a shot from centre floor and landed in the net.

Nice job boys, you did a great job!!! 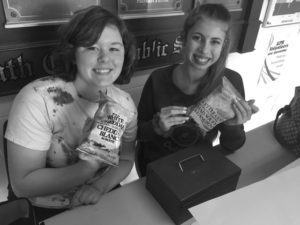 Pop, pop, pop, do you hear that, Millbrook? That’s the sound of Millbrook South Cavan Public School’s very own popcorn day! Popcorn day took place March and April and raised a lot of money for the Grade 8 graduation trip! At popcorn day there was many different flavours to choose from and each bag only cost 2 dollars, and what a great cause! The available flavours were: butter salt, dill pickle, kettle corn and white cheddar. Thanks for participating Millbrook!