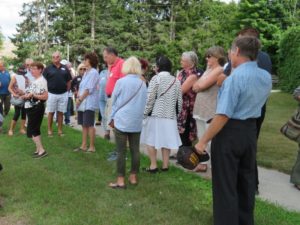 On Sunday August 14th, more than 40 visitors from Toronto and beyond came to Pontypool for a tour of the town and to witness the dedication of the new commemorative garden established in honour of the Jewish community members who made Pontypool their summer destination in years past. The commemorative garden marks the location where the train service dropped the vacationers, and is on the site of a former CPR coal shed used to store coal to fuel the train which operated between Peterborough and Toronto.

The walls of the Community Centre were lined with historic displays about the community’s Jewish connections, with food and local residents to welcome the visitors. Organized by Manvers Historical Society President Kathy Morton and Shirley Solomon of Toronto, the attendees included a significant number of former seasonal residents from the Toronto Jewish community who visited the area as children. The event was prompted by the desire to visit the town again before they became too ill to travel.

During the period from the early 1920’s to the late 1970’s, Pontypool was a popular summer retreat which hosted working class Jewish families who travelled by train to stay in rental rooms and cabins to escape the oppressive Toronto heat and humidity. The extraordinary resort community was initiated by Polish-Jewish immigrant Moishe Yukle Bernstein in 1916.  Recognizing that that Toronto’s Jewish garment workers and their families could find no relief from the sweltering city heat, he opened up his Pontypool home as a summer getaway. It quickly became the place for eastern European Jewish immigrants to holiday in the summer, as at that time many of Toronto’s beaches and pools bore prominent signs reading “No dogs or Jews Allowed”. During this period, over 46 cottages and resorts set up shop and served a primarily Jewish clientele, and in the late 1940’s, a seasonal synagogue was built. As the wealth of the Jewish vacationers rose and their access to more popular vacation spots such as the Muskoka’s and the Kawartha’s increased, the popularity of the Pontypool vacation hub eventually evaporated.   The situation was well illustrated in 4th Line Theatre’s original production entitled “The Right Road to Pontypool”, which ran in 2009 and 2010.

As the happy visitors strolled the streets reminiscing, they often pointed to homes along the way, mentioning the names of former as well as current residents who had played a role in their childhood summers. As she guided the guests along the street, Kathy Morton explained the progressive approach the neighbourhood reflected, noting that the Orange Lodge accommodated events for all races and denominations, hosting dances, meetings and theatrical productions. This was also the site of the first shows put on by the well-known comic duo Wayne and Shuster.

Former talk show host Shirley Solomon, who helped organize the event, has fond memories of summers spent at the farm of her hosts, the Manettas, and how welcoming the people of Pontypool were in general.

In the community centre, local residents including Councillor Heather Stauble, Paul Richardson and MP Jamie Schmale attended the blessing of a plaque including the names of all the homes and resorts that received Jewish tourists that was performed by Mark Siegel, the acting rabbi at the Beth Israel Synagogue in Peterborough. The plaque will remain in the community centre where Jewish residents including the Manettas, the Bernsteins, Whites, Crystals, Lofchicks and other Jewish children once attended school when they lived in Pontypool. It stands as a testament to the generous and open-minded attitude exemplified by residents of this small Ontario town to appreciative visitors unaccustomed to such a warm welcome. KG