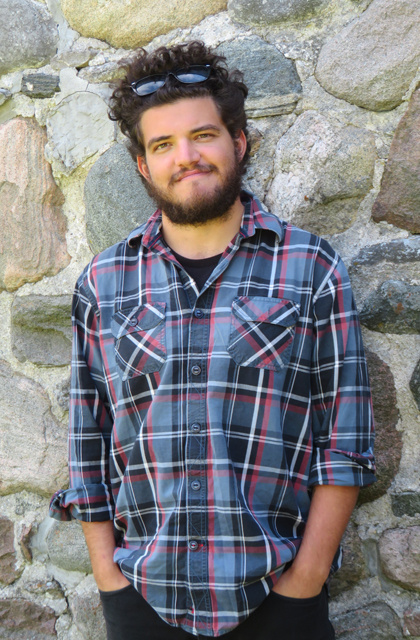 Photo Karen Graham.
Griffin Clark is delighted to be back home spending an idyllic summer starring in the July production at the 4th Line Theatre.

These days Griffin Clark is a bit of a travelling man, having just returned from a seven month trip in New Zealand.

He’s delighted to be back home in Millbrook for the summer, catching up with his family and friends before he leaves for another extensive trip, this time to Europe.

Nostalgia isn’t the only thing drawing him home.  Griffin was invited to audition for this July’s production of a new work, Bloom: A Rock ‘n’ Roll Fable, written and featuring original music by Beau Dixon.  Beau and Griffin know each other well.  They have worked together in several earlier productions at 4th Line Theatre, including Dr. Barnardo’s Children and Schoolhouse.  Griffin has also taken private voice lessons from Beau.  Griffin was flattered to be sought out for this production, but it’s clear the shoe fits.

Griffin signed on for the theatre company’s July production.  Bloom: A Rock ’n’ Roll Fable follows the lives of two small-town best friends from Assumption, Ontario, who share a lifelong love affair with rock ’n’ roll music. The play is based on stories from local rock and roll celebrities, and is set in the powerful musical period of the 1970’s where rock and roll was major influence in the world.  Accompanying Griffin in the lead duo is his real life best friend and band partner, Owen Stahn.  Together Griffin and Owen formed Toronto rock band in 2014 called The Slivers, writing and performing original rock in bars and venues in the city with their friend and neighbour Dylan Storace accompanying them on drums.  With this kind of history, performing on stage as best friends and band mates will not be a stretch.

Growing up in a musical household, Griffin always had access to instruments to pick up and explore.  At Millbrook South Cavan, he secured the popular bass guitar instrument in music class, and it continues to be a favourite.  He then took his creative interest to the arts program at the now defunct PCVS, followed by post-secondary studies on the technical side of music, studying sound engineering.

Griffin sees music and the creative arts in general as powerful antidotes to the stress of everyday life, and offering comfort and solace that feeds mental health for performers and audiences alike.   While music and theatre may not provide stable income or employment, this young man finds a satisfaction in his career choice, whether he is starring in a theatrical production or singing with his guitar in an open mic event in Denmark.  He is at the desirable place in a career described by Warren Beatty as the definition of success: “a place in your field when you don’t know whether what you’re doing is work or play.” KG

Welcome Griffin back to town this summer at one of the “Bloom” performances running Tuesdays to Saturdays in July.  For more information or to purchase tickets, visit the box office at 4 Tupper Street in Millbrook, or the website at www.4thlinetheatre.on.ca  or call 705-932-4445.