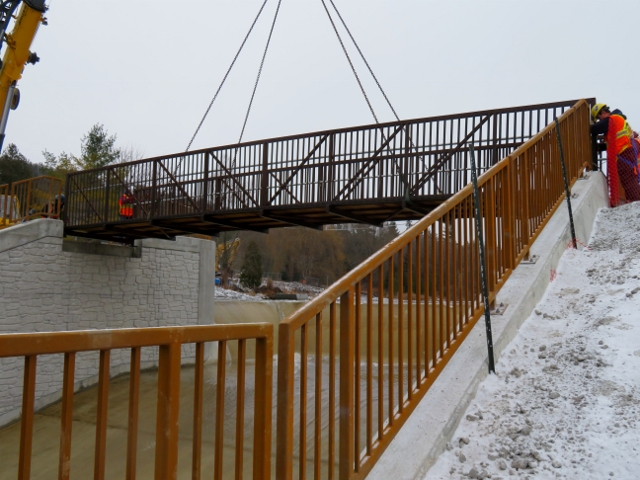 In his report to Council on December 17th,  ORCA CAO Dan Marinigh reported on the progress of this significant capital project.

The good news is the project is on budget and the construction activities are nearing completion for the year.  Due to unusual November weather, the final stages of the project are delayed until next spring, including the hardening of the earthen dam and the remediation of the construction site near the entrance to the trail.

Last month, the pedestrian crossway over the spillway was installed with surgical precision orchestrated by the contractor, Facca Inc.  A crane lifted the steel bridge over the dam and gently laid it directly onto the waiting bolts with less than 1/8th of an inch of wiggle room.

Dredging activities have been challenging throughout the project.  As previously reported, the technology employed by the contractor did not perform as expected; in fact the equipment stirred up the targeted sediment, further saturating it with water and making its removal extremely difficult.   The dam construction itself required the removal of approximately 750 cubic meters of sediment which was completed in April.  In response to public requests, in the project tender the township included a contract for additional sediment removal to bring pond water to a greater depth. Facca Inc. also bid on this ancillary dredging contract on a performance basis for up to 15,000 cubic meters to be removed at $24 per cubic meter for a maximum cost of $350,000.

While the rate of extraction improved as the dredging activities continued and were extended to mid-December, Marinigh explained that the contractor expected to remove slightly more than half of the projected volume when the season wrapped up in December.  The terms of the contract were to remove the sediment on a “best efforts” basis, as the project priority was the dam itself.   With roughly 8,000 cubic meters expected to be removed, the township will pay out $192,000 on this portion of the contract.

Representatives of the SavetheDamMillPond group were on hand to request that dredging activities continue with or without the current contractor, Facca Inc. to the original 15,000 cubic meter level.  Spokesperson Rob Ross suggested that continuing to dredge while the area remained an active construction site was the best way to ensure the pond was rehabilitated and water depth was restored to more historic levels.  The water on the west side of the pond is now only a few inches deep, allowing geese and ducks to walk rather than swim near the pond surface.

Marinigh’s explanation that the construction project had required nine permits intensified the feeling that time was of the essence amongst the dredging proponents, who suggested that if dredging activities continued, these permits might be extended to avoid having to start the approval process again next year.

SavetheDamMillPond member Alex Bushell indicated that the group had spoken to an alternate contractor who might be willing to continue to dredge the pond.  Given Facca’s experience, it is unlikely they would be interested in returning next year for another round of dredging unless it was at a much higher contracted rate.

Council agreed to have staff meet with the group representatives to explore the options for continued dredging to get closer to the original sediment removal target.  KG