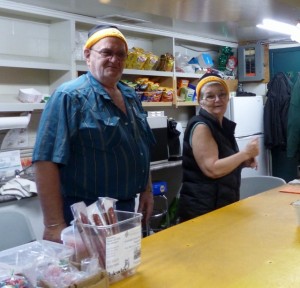 One of the consistent features of the Millbrook arena is the sight of George and/or wife Marion working behind the concession stand with a smile on their faces waiting to serve. For the past five years, this couple have operated that concession stand, putting in 70-80 hours per week beginning after the September long weekend until the end of the hockey season which happened this weekend. They did the same from 1989-1992 as well. George and Marion put in these hours because they enjoy serving the community and have a genuine love of the people who use the community arena.

Marion is responsible for purchasing. She selects the items for sale, prepares the bags of candy and decides which variety of chips and juice she will stock. Marion really knows her customers. Don’t try to sell her shoestring fries- her customers prefer the larger variety. Each season she goes through 30 boxes which hold six bags each of these arena staples. It is one of the most popular items on their menu, along with chocolate milk and slushies, of course, but you won’t find white milk in their fridge- it just doesn’t sell.

On Sunday the canteen had a bit of competition from the Figure Skating Club’s bake sale table, but the line ups at the counter were long at the opening of the Skating Club finale. Customers included delicate young girls making agonizing decisions with their change purses in hand, as well as plenty of male customers getting their final order of fries before the booth closed for the season at 3pm.

What you might not realize about this set up is that the profit that the Corfe’s earn throughout the season is donated back into the community. This year, the recipients of their donations will be the Millbrook Food Share, Millbrook Community Care and the Millbrook Minor Hockey Association. So this might look like a job, but the Corfes manage the canteen because of their relationships with the facility visitors and users.

On their counter, you may have noticed a Styrofoam cup with the words “Jenn’s coffee fund” written on it. This fund was set up a while back by George and Marion to help out a resident, Jenn Puck who has MS, through a hard time. What surprised them was that when the funds were presented to her, Puck wanted to donate the money right back into Millbrook Minor Hockey because at the time her children were playing hockey there.

In 2014, George and Marion were presented with the distinguished Volunteer Award for the County of Peterborough, a recognition they truly deserve for their dedication to the community.

Spending time with George will leave you smiling as he is quite witty and always has a great tale to tell or a joke up his sleeve. Marion admits that she is at the arena for the children- she loves watching them grow.  From Slurpee’s to candy bags and Chocolate Milk, George and Marion are always busy trying to make sure that there are always enough goodies available when the children come, and there is always a pot of coffee at the ready for those of us that need it at the 8am practices. The Corfes remain grateful for the patronage of their loyal customers. See you next year, Marion and George!