WWII Vet Travelled with Bomb in his Pocket 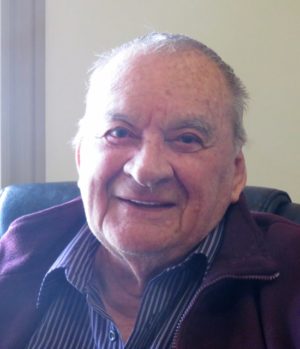 In 1940, Ab Sinyard was approaching eighteen years of age in his home town of Deere Lake just outside Cornerbrook, Nfld.  His mother ran the local hotel and times were tight, so as soon as he was eligible, he enlisted with the Royal Air Force.  At the time, Newfoundland was still part of Britain, so when war was declared on Germany, Newfoundlanders were also at war.  There was no conscription, nor did there need to be: Newfoundlanders willingly joined the war effort.  Out of a population of 300,000 the country provided 22,000 residents who joined the war effort willingly, motivated to help with the war effort and also to escape the widespread poverty facing their country.

Sinyard did was not attached to the Royal Newfoundland regiment, but was shipped off to the Air Force Base in Abingdon on Thames 16 km south of Oxford, where he trained to be a mechanical engineer for the Royal Air Force Bomber Command.

As a Mechanical Engineer, Sinyard’s job was to keep the bomber aircraft air-worthy.  This was a challenge, as there was constant pressure for aircraft to support Allied bombing missions.  Planes were being built and assembled in a hurry, prompting pilots to claim they were flying “by the seat of their pants”.  Some models were more reliable than others, and when a plane went down in Allied territory, it was Sinyard’s job to examine it to see if it was recoverable.  Usually the answer was no.  Landing gear was too expensive to replace, and was usually the first section damaged in an emergency landing.

Sinyard would be directed to the fallen aircraft’s location by local residents and fly to the closest airfield.  One of the most common locations for downed aircraft was Norway.  Once he concluded the plane was beyond repair, he had a quick solution in his pocket- a small bomb.  The condemned aircraft would be immediately destroyed to prevent enemy troops from acquiring any information about its technology.

By the end of the war, he was married to a teacher who had stayed at his family hotel in Deere Lake due to a shortage of housing in town.  With little incentive to return to Newfoundland due to persistent economic conditions there, he accepted a job with a mining firm in Kirkland Lake owned by the family one of his air force colleagues, where he relocated with his wife.  At first they lived in a tent near the lake, as there was a housing shortage there as well.  When fall arrived, the couple received housing priority because teachers were in short supply, and they moved into a home.

Sinyard’s job at the mine was to maintain all of the machinery, including the extraction equipment and the machines used to move staff and raw ore, referred to as “muck” because of its consistency.  After nine years there, the couple then spent four years in Botswana, with Ab working for the government as a mine inspector and his wife teaching in a local school.  They eventually moved back to northern Ontario, spending a decade in Elliot Lake where he was responsible for the equipment used in 13 local mines.

Now a widow, Sinyard currently resides in Centennial Place in Millbrook, brought here by his daughter who is a nurse in Peterborough.  As a mechanical engineer working behind the lines, he served his country well.  KG