Turmoil in Township Over Proposed Commercial Development on Fallis Line 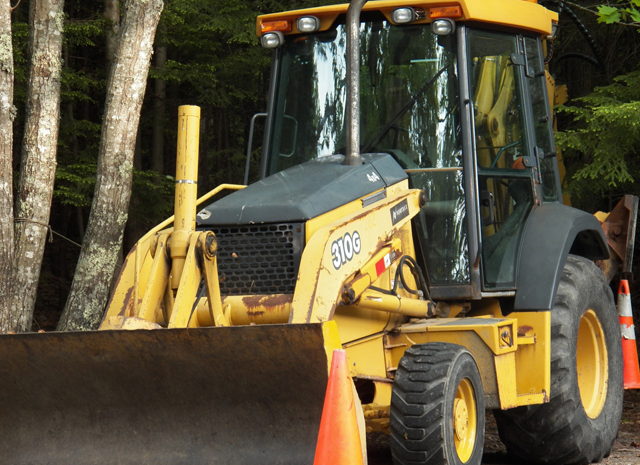 There was a wake-up call to the community as word spread about a proposal for a new commercial development on the south west corner of the intersection of Fallis Line and County Rd. 10 submitted by the Towerhill developer.  After the initial public meeting in January drew little interest, a second public meeting was held during the March 19th Council meeting that attracted a crowd.

At issue was Official Plan and Zoning By-law Amendment applications to change the designation of a 2.29 acre section of land at 919 Fallis Line and a portion of the adjacent land from residential to Community Commercial.  This property falls within the northern portion of the Millbrook Settlement Area.  The concept plan attached to the application outlined a proposal for the establishment of business, professional and medical offices on the property, which will require both amendments as well as a Site Plan Approval before it can proceed.

The original concept plan included a commercial building of 13,412 square feet as well as a drive-thru restaurant of 2,476 square feet.  After feedback from the initial public meeting and other submissions received by the township, two subsequent concept plans have been submitted by the proponent.  The most recent one includes a slightly smaller retail/office/medical building and a 5,000 square foot restaurant with no drive-thru access.

In this public meeting as well as in other submissions to the township, residents have expressed concern over the proposal.  A petition including more than 180 signatures in opposition of the zoning change was submitted in February by Millbrook resident Grace Glass, which outlining their opposition to the establishment of a drive- thru restaurant at that location because it would have a “detrimental impact on the existing businesses in the downtown Millbrook community”.

Despite the fact that the developer had removed the drive-thru option from their most recent proposal, much of the discussion during the public meeting focussed on how undesirable such an establishment would be for the community, citing health concerns caused by idling cars and increases in garbage along roadsides.

Other areas of concern about the commercial development in general included the increased traffic at the nearby intersection that would result from this development.  Because the intersection sits at the crest of a hill, there were concerns that the increase in traffic turning there would pose a danger to the travelling public that would not be mitigated by adding turning lanes.  A commercial development at this corner will also have a negative visual impact on the aesthetics of this green gateway to the historic village.

The primary economic concern was how a potential commercial development would fragment the business community and undermine the sustainability of the village.  Municipal Revitalization and Heritage Advisory Committee chair Rob Ross suggested that an approval for this development would undermine the work and investment currently underway for the downtown area, including the recently announced Community Improvement Plan expenditures.

The concerns were aptly summarized by Millbrook resident Claire Van Loon who suggested that while we may want to “have it all right here”, as the township slogan suggests, the “all” does not include this commercial development.

Township Director of Planning Karen Ellis explained to the gallery that the application was only the first step in the approval process to which a development like this would be subjected.   A Zoning By-Law amendment outlines the possible uses that can be accommodated on the site, and does not approve any specific buildings or layout of the property.

She also indicated that the township had considered implementing a full ban on drive-thru facilities during the development of the Township’s Official Plan, but such a move would have been challenged by the fast food industry through an appeal to the Ontario Municipal Board (OMB) and the township was advised that the appeal would like be successful.

There are a number of tools at the disposal of staff to control development in more subtle ways that would not be as vulnerable to legal obstacles and help them strike a balance between public and private interests, such as establishing setbacks, building dimensions including height restrictions and other details that would be part of a zoning amendment or a site plan.

If the commercial development is not approved, residential development will likely proceed on this site.  If the developer is seeking to maximize the return on this particular location, current zoning permits high density housing including apartment blocks which may pose similar challenges to the aesthetics, traffic and water usage as the commercial development, but could provide a boost to downtown businesses.  The decision on the application will be made at the April 17th Council meeting. KG