The habitable zone was redefined and zip we lost an exoplanet 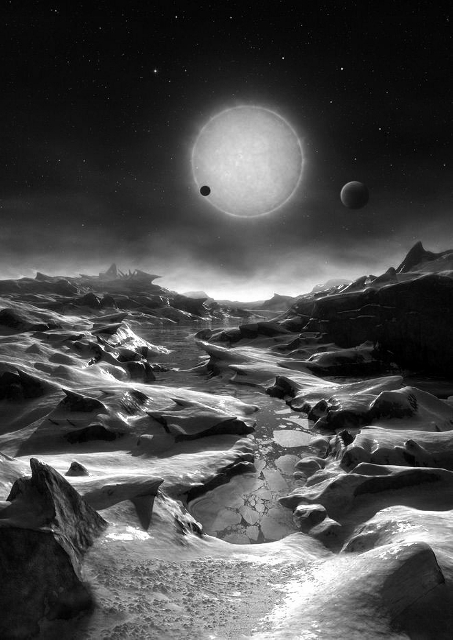 ARTIST RENDERING OF TRAPPIST-1 supplied. Trappist-1 is the hot new candidate for an Earth-like exoplanet. It has seven exoplanets orbiting it, three of which are considered to be in its habitable zone. Fortunately Trappist-1 is also an ultra-cool dwarf star not known to erupt frequently.

A few years ago Pluto got its pink slip and dropped from a planet to dwarf planet. That may change shortly. So hang in there you Pluto buffs.

Meanwhile Alex Glocer and Vladimir Airapetian, the gentlemen who discovered Proxima b have redefined what they call the habitable zone. That’s where an exoplanet wouldn’t be too warm so cold that it couldn’t be inhabited by life forms – even if they were just micro organisms.

Until Trappist-1 was discovered, Proxima b was the sweetheart of the exoplanet world. It is just 4.3 light years from Earth. With today’s fastest rocket we could get there in a scant 78 years. Humm, maybe we should send a happily married male and a female along. Their children would be born in transit. So the kids should still be alive when they arrive at Proxima b.

Now the discoverers of Proxima b have gone and shot themselves in the foot. They redefined the definition of “habitable zone” and Proxima b doesn’t fit the new definition. There are a couple of reasons for this.

For starters, planets in the habitable zone of red dwarf stars such as Proxima b would lose too much oxygen to support liquid water and in the end – life.

At the heart of the problem are stellar eruptions, something for which red dwarf stars are known. These eruptions blast high-energy X-rays and ultraviolet emissions towards the exoplanet. The end result of this atmospheric erosion is the spewing off of oxygen.

So being where it’s not too hot or too cold (The Goldilocks Zone) isn’t good enough, not if you’re orbiting a red dwarf star. “The more X-ray and extreme ultraviolet energy there is, the greater the ion escape effect becomes” said Alex Glocer.

The team calculated the rate of atmospheric oxygen lost by considering the red dwarf star’s age, and its distance from the planet in question. .Proxima b orbits its star 20 times closer than Earth orbits our Sun.

Because of its tight orbit around Proxima Centauri, researchers estimated that the planet experiences atmosphere-stripping stellar storms every two hours. Based on assumptions about Proxima b’s size and composition, its oxygen will be gone in about 10 million years.

And so another exoplanet bites the dust. It just goes to show you how lucky we are to have Earth. But don’t give up hope yet. There are another 4,582 confirmed and candidate exoplanets bopping around out there. We may yet find Earth2.