Refugee Children of Family #417 Don Skates at the Millbrook Arena

You may have seen the comprehensive article chronicling the circuitous path of Amal Alkhalaf and her three children from Syria to their new home in Peterborough in the January 26th edition of MacLean’s. Fourteen months after their flight from ISIS territory in Syria, they soon found their new Lebanon neighbourhood controlled by the same terrorist organization.   The luck of this family finally turned in November, when they were selected by authorities to come to Canada and began their new life on December 30th. 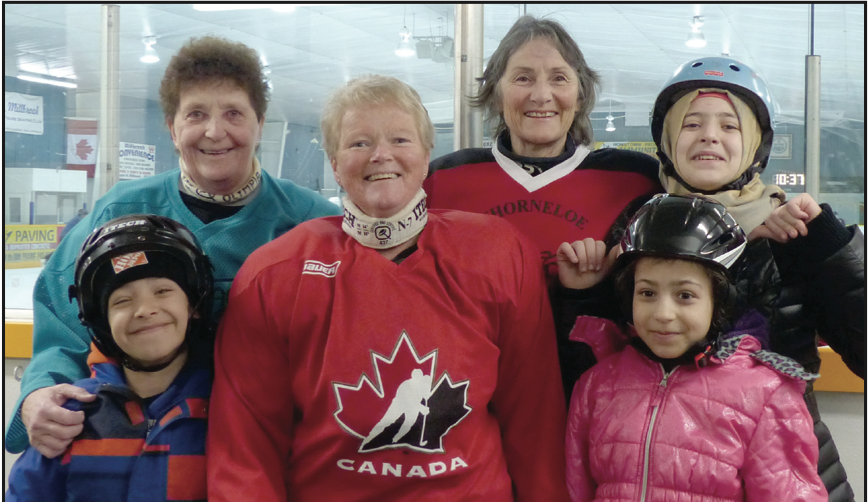 Amal is currently studying English at Fleming College, so when a PA day arrived last week, one of the sponsors, Lee-Anne Quinn took control of the situation. The day of activities for the children began in Millbrook where they put on skates and with some trepidation, stepped on the ice for the first time. By the end of the half hour, eight year old Dayla was able to manoeuvre on her own, gliding within arm’s length of the boards but not holding onto them. It took Ansam a bit longer to get onto the ice as she struggled to fit the helmet over her hijab, while Ibrahim just seemed to enjoy the attention of the adults on either arm, so he wasn’t venturing off on his own. During the scrimmage for the adults, there were squeals of joy as they raced around like most visiting children at the rink, playing tag and making jokes. After lunch at Quinn’s home, the children headed to the YMCA for a swim, the girls equipped with body-covering bathing suits from Toronto. Apparently the sponsoring group has thought of everything to ensure the family is comfortable in their new surroundings and the children are enjoying their new life in “heaven”.