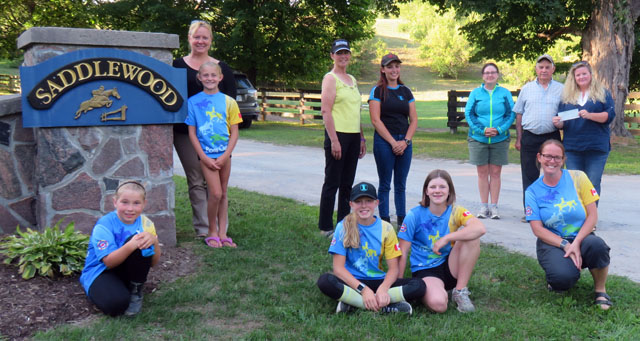 Even though the club has effectively been on hold since March, they continued to conduct a bottle drive and decided make this significant donation from the proceeds to this local equestrian centre where they would have normally competed this summer.  The twelve members wanted to pay it forward to an organization they appreciate.

Founded in 1968 on 400 acres north of Bethany by Jim and the late Janis Smith, the centre started with 10 horses, which climbed to 100.  The facility is now operated by daughters Kim and Heather, but this summer, Covid dealt the centre quite a blow, eliminating or reducing many of its programs.  After selling a few horses, they still have 70 animals to look after.  As they say, that’s a whole lot of hay!  Not to mention foot trims, tooth care and vet appointments to ensure they remain healthy.  More than 117 sponsors have stepped up, donating $22,685 at last count.

Saddlewood will be open for riding lessons this fall, weekday lessons for all ages and Saturday riding for children under 16 years old.  Private, semi-private and group lessons are also available.  For more information, contact them at 749saddlewood@gmail.com.