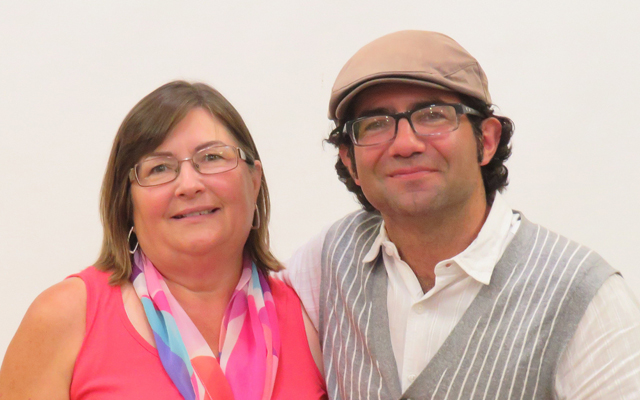 The Millbrook and District Garden Club celebrated their 25th anniversary with a celebrity speaker who offered an informative and entertaining presentation based on his philosophy of healthy garden dynamics.  Zammit is the enthusiastic director of the Toronto Botanical Garden (TBG) who makes regular appearances on television, radio and at garden clubs and horticultural trade shows across Canada and in the United States.

The evening began with reminisces about the club’s beginnings.  In 1992, the late Loretta Pompillo started the club at the Old Millbrook School.  After Loretta died in a car accident in 1998, the club sought new leadership and while she was out of the room, current President Wendy Olsen was nominated for the position.  Members thanked Wendy for supporting the club and continuing in the role for the past 19 years.

Prior to joining TBG, Zammit spent 20 years at a large Toronto nursery called Plant World, where he became disillusioned by persistent customer requests for quick fixes to their garden “problems” spurred by unrealistic advertising by suppliers to the nursery industry.  His presentation was directed at changing gardeners’ expectations.  Showing a grapefruit-sized, bright red tomato, he suggested that the resources required to produce what is perceived as perfection are not worth it- bigger is not really better.

His presentation, entitled “Feeding the Garden From the Garden”, focussed on ways to connect with the garden; to feed it and learn from it, suggesting if you do so, your garden will feed you back.  He also encouraged the audience to think of brown as a legitimate garden colour.  Rather than removing spent flowers as they turn brown, he asked that gardeners leave them to mature, providing food for birds and other wildlife.  When deadheading or removing discoloured parts of plants, he suggested dropping the pieces on the ground where they would have fallen naturally, so their decomposition can improve the soil quality.

It’s a process he takes to the next level each fall.  Since the City of Toronto collects leaf and brush debris in plastic bags, it is easy to identify this rich resource for garden soil improvement.  He collects bags from his neighbours, spreads them on his lawn and chops them up with his lawn mower and then applies the leaf debris in a 2” layer of mulch over his entire garden.  This environmentally-friendly soil improvement program has helped feed his garden, and contrary to  the stereotypical shoemaker who has no shoes, Zammit’s garden is remarkable and has earned several awards and been featured in many magazines.

For those looking for more information, Zammit identified some of his favourite resources, including gardening books The Living Landscape, Bringing Nature Home, and Terra Preta.  There was much food for thought delivered with enthusiasm and energy that inspired the audience to feed their gardens in a different way for the next season.  KG