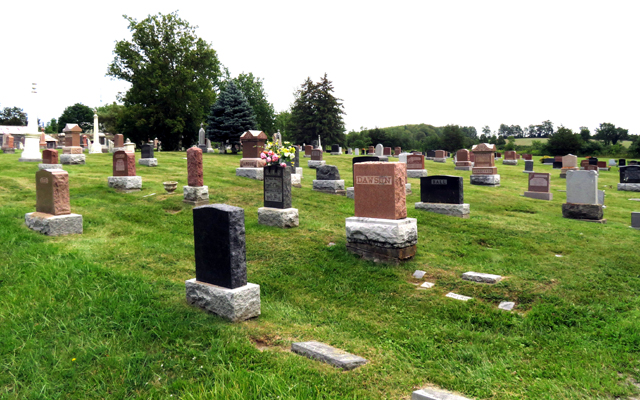 Photo Karen Graham
Among the 13 cemeteries in the township, three have already been handed over to the township with more to come. Municipalities must assume financial and physical maintenance responsibilities.

It’s a trend across the country.  Cemeteries are facing financial pressure as costs of maintaining their property and the paperwork associated with these landmarks are growing as their revenues are in decline.

The growth in popularity of cremation over traditional burials is a major contributing factor to the shrinking income, particularly for the smaller cemeteries run by church groups and local volunteers.  Plots or mausoleum niches for cremated remains are much cheaper than a grave for a casket which translates into less money to sustain cemetery operations.   In addition, because most modern families are geographically dispersed, regular gravesite visits are quickly becoming a thing of the past so the appeal of the family plot is fading fast.

The Funeral, Burial and Cremation Services Act, 2002 (FBCS) describes the terms governing cemetery management, while the administration of the bereavement sector is managed by the Bereavement Authority of Ontario (BAO).   Not surprisingly, regulations incorporated in this legislation are extensive and include reporting requirements, by-laws and prescribed fees for cemetery services.  It also includes provisions that identify the options available to cemetery boards of trustees facing an unsustainable future.  When a cemetery board decides to relinquish control over its cemetery operation, trustees have the option to turn it over to the municipality in which it is located.  The municipality is obliged to assume responsibility for the operation of the cemetery, including all the cemetery’s rights and obligations, its assets, trust funds and trust accounts managed by the previous owner or operator.

Three of the 13 cemeteries in Cavan Monaghan have been turned over to the township.  Because all three are inactive, the township responsibilities are limited to grounds maintenance.  The remaining ten organizations are in a variety of financial circumstances, ranging from being self-sufficient to seeking municipal financial assistance for special projects, to requiring ongoing support in order to survive.  Several have already approached and some have received township support, including Gardiner’s Cemetery, which recently received $3333.00 to conduct a survey and make site repairs.

The problem is growing.  For example, the City of Timmins operates three municipal cemeteries with an annual budget of $700,000, $270,000 of which is generated by burial fees and plot sales and the rest coming from the city.  According to their cemetery manager, the situation continues to deteriorate, with revenue shrinking roughly $15,000 each year.  Staff is considering introducing automatic annual fee increases to help offset the decline.

President of the Ontario Cemetery and Funeral Professional Association Darren Denomme believes that municipalities have to change their mind set when it comes to local cemeteries.  In his view, cemeteries should be seen as a public service, along the lines of parks and playgrounds, instead of failing businesses, and municipalities should be prepared to pony up the funds to keep them alive.

The Association of Municipal Managers, Clerks and Treasurers (AMCTO) recognizes this looming problem, and in April hosted a training session on Cemetery Management and Compliance for municipal staff.  Cavan Monaghan Clerk Elana Arthurs attended in order to get a better handle on the nature and extent of municipal responsibility in the event of cemetery abandonment.   So far, cemeteries under municipal control are inactive, so there are no ongoing transactions to administer or new plots to sell, but this could change quickly.  Cemetery boards face complex paperwork and their aging members will face challenges in continuing to manage their responsibilities.

In her report to Council, Arthurs suggested the township examine the financial support required by local cemeteries on an individual basis to take into account the diversity of their financial positions.   One more cemetery has approached the township to take over its operations already, while others are will to continue with the right financial support.

Council will receive an estimate for this pending liability from the Clerk’s office for consideration during the 2018 budget deliberations. KG