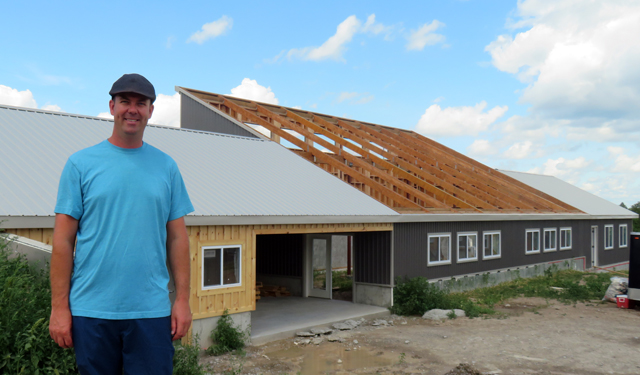 Photo Karen Graham.
Norm Lamothe stands in front of the new office / greenhouse / syrup production area that is near completion at Woodleigh Farms on Sharpe Line.

July 17th marked two years since an early morning fire wiped out five barns in the twinkling of an eye at Woodleigh Farms in Cavan Monaghan Township. Five fire crews responded to the devastation, where 30,000 square feet of barns were leveled and a herd of 1500 pigs perished, along with a decade of breeding efforts.   It was one of the biggest blazes faced by the firefighters, who succeeded in saving the century home situated less than 70 feet from the blaze.

The Winslow family has operated the farm since 1902.  Don and Margaret’s daughter Emily and their son-in-law Norm Lamothe have moved into the family home and have recently made their mark on it, but the most visible transformation is a bit further up the driveway.

Near the crest of the hill behind the home sits three spanking new buildings: a storage shed; a machine shop and a third that houses an office, a passive greenhouse and a new maple syrup shed, but that term hardly does it justice.

When Norm describes these buildings as over-engineered, he really means he has thought them all through, and then some.  Before construction could begin, the family spent three months moving soil to change the elevation of the building sites.  What was once a slope is now a massive level staging area in front of the main building, and much of the former gentle slope is now an abrupt elevation change, but it’s built into the rear wall, stabilizing the indoor temperature.

The 1800 square foot greenhouse is situated between the office and the syrup production area to provide an additional buffer against seasonal temperature swings.   The floor is soil, not for growing plants but to absorb and retain heat from the sun.  Below grade is a series of pipes installed at three different levels which are open in the corners and the centre of the room.    They are equipped with fans that can blow air in either direction: to move warm air below ground for future use, or to push it back into the greenhouse.  Most of the heat comes from a solar roof that is about to be installed.  The sloped roof faces south and is designed to capture the January and February sunshine.  Most of the rear wall is below grade, providing natural, passive temperature stability.  Near the top are windows like those that are commonly found in dairy barns and open automatically to allow hot air to escape when the room reaches a predetermined temperature.

The material for the roofing looks like heavy duty bubble wrap.  Despite its appearance, it offers the same insulation factor as traditional polycarbonate building materials traditionally used in greenhouses and is half the price. KG

If things cool down too much in the greenhouse during the early spring growing season, heat from the adjacent syrup production area can provide extra heat during maple syrup season.  On the other side of the greenhouse, heat provided through the in floor heating of the office can also move in to warm things up.

The greenhouse is just one of the initiatives Norm is undertaking to put his mark on the family farm.  He purchases Cavan Monaghan’s yard and leaf waste collection, processes it and uses it as a soil amendment.  He is also experimenting with carbon capture which could become another soil amendment or feed supplement.  The research continues…

Currently Woodleigh farms works 500 acres.  In his youth, Norm was eager to acquire more land, feeling that scale was required to compete in the modern agricultural world.  He now sees things differently.  He is looking for ways to be sustainable on a smaller scale, and that doesn’t mean going back to the 5 cows, 8 chickens and a pig model.  He embraces technology, using maps created by drones he used to sell to fine-tune his soil health practices.   Stepping back from that business allows him to focus on the farm, completing the reset process that began two years ago.  He may be working closer to home, but his mind is travelling a mile a minute, and he seems to enjoy that. KG