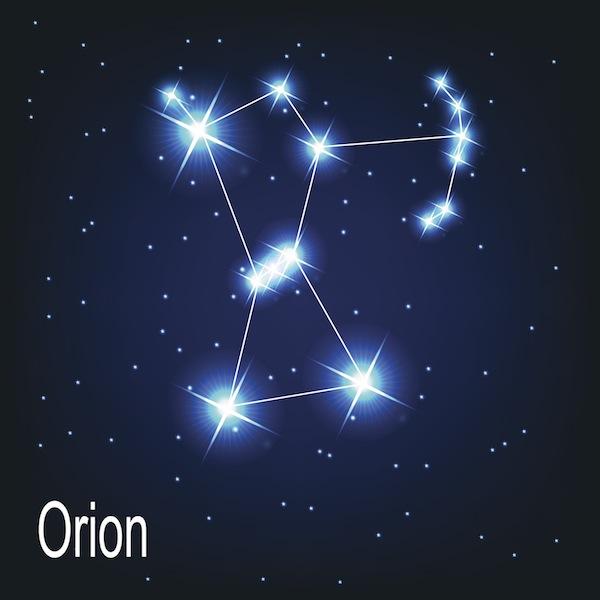 Orion is winter’s sky master. He is visible from Sunset to pre-dawn high in the southern sky.

Orion the Hunter is arguably the most familiar constellation after the Big Dipper to us Northern Hemisphere natives. And in February he is in his glory in the southern sky.

You can spot him just after sunset. Most obvious is the straight line of three stars that represent his belt. Orion’s belt is also a signpost pointing upwards to a large naked eye star cluster called the Pleiades. It appears as a misty cloud about the size of your thumbnail at arm’s length. In a pair of binoculars the stars become obvious and are absolutely gorgeous.

While you have your binoculars in hand, move back to Orion’s belt. Hanging down from it is his sword. Again you’ll spot another fuzzy patch in the handle of the sword. While it is visible to the naked eye from a dark rural location, that blur is the Orion Nebula, also known as Messier Object 42. In your binoculars it really comes to life, and it a telescope it is stunning.

Going back to Orion’s belt, if you follow it down you will come to the constellation Canis Major also known as the big dog. Canis Major is one of Orion’s hunting dogs and is also home to the brightest star in the night sky – Sirius.

Moonies will greet a First Quarter Moon on February 3. Experienced “Moonatics” know that this is the best phase to observe the Moon either with binoculars or a small telescope. That’s because at this phase the Sun creates long shadows on the lunar surface making craters and mountains stand out more readily.

February 10 is the Full Moon. For you Farmer’s Almanac fans February’s Full Moon is known as the Snow Moon, which makes a lot of sense for Canadians. The Full Moon is the least popular for observing because the surface looks perfectly flat with just a scant number of craters visible along its limb.

On February 18 we have the Third Quarter Phase so the Moon rises very early in the morning and is frequently visible during the morning hours when the Sun is up.

Deep Sky observers will relish Feb 26 as that will bring a New Moon so the night sky will be at its darkest. That’s great for observing galaxies and distant star clusters that are dim and difficult to see when the “lunar lights” are blazing.

As far as planets go, most of the popular orbs are relegated to the dawn sky. In fact the only night time planets are Uranus and distant Neptune. Look for them in the constellations Pisces the fish and Aquarius respectively. Neither is visible to the naked eye, so binoculars or a small telescope are required, preferably a small telescope.

That’s what’s up, so bundle up and keep looking up.