The Millbrook Times » 2015 » No Duff- Mock Evacuation Exercise A Success

Last Thursday, the Millbrook Arena was transformed into a temporary emergency shelter by The Canadian Red Cross assisted by local emergency personnel from the Cavan Monaghan Fire Department, the OPP, the Community Policing organization and the local Lion’s Club.  The objective was to run through a drill to practise the services offered by the Red Cross as outlined in their agreements with the Cavan Monaghan and Otonabee South Monaghan townships.  It was not a performance evaluation for any group, but a drill to identify strengths and weaknesses in their Operational plan to assess its effectiveness. 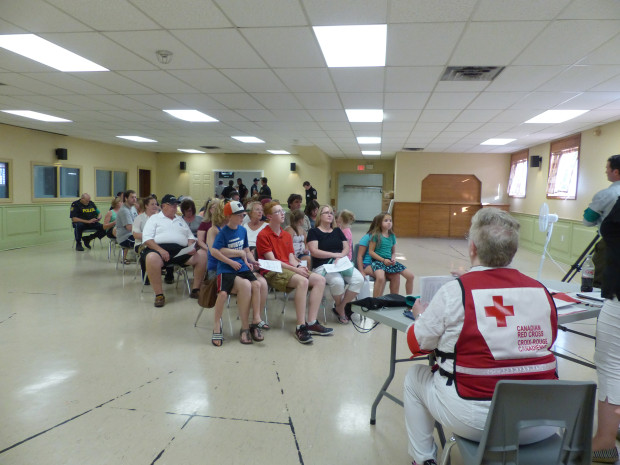 The Millbrook Arena was transformed into an Emergency Shelter last week in a mock evacuation exercise conductd by the Canadian Red Cross with the help of local police, fire fighters, service clubs and community volunteers to test their emergency evacuation plans. Photo: Karen Graham.

Mock disaster nick-named “Muddy Reserve” simulated a flood on the Hiawatha reserve, requiring the evacuation of residents, and was conducted in real time to simulate a real response.  Community volunteers assumed the roles of evacuees and were briefed of the nature of the disaster at the outset of the exercise, and given personal details of their personas, including family circumstances, health concerns and the needs they would present to the staff.  They were asked to immerse themselves in their roles to engage the emergency staff to keep it realistic, but were provided the phrase “No Duff” to use in the event of a real emergency. 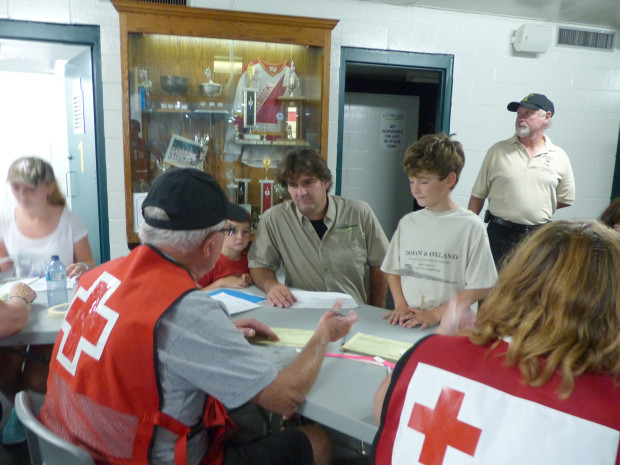 After receiving their marching orders, evacuees headed to the entrance of the rink where they were greeted by volunteers who registered each member with their personal details.  Six services were available including lodging, food clothing, counselling and other personal services from booths set up on the pad in the arena.  Volunteers approached the staff with their requests and were processed according to their needs.

Amongst the volunteer participants were Millbrook Councillor Ryan Huntley and his sons.  Huntley later commented that he was “very impressed at the level of professionalism in the various groups involved, and can truthfully say that should a crisis ever arise, I have the utmost confidence we will be in great hands that will see us through.”…