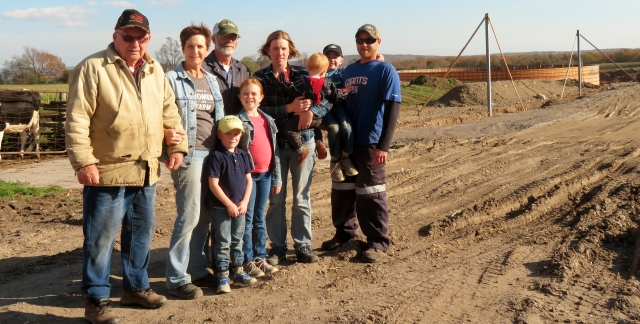 Photo Karen Graham. Members of four of the five generations of the Hutchison family who have lived on the family farm on Zion Line stand in front of a construction site. A new manure pit and dairy barn are under construction at Alona Farm as Melissa and Mike Harrigan buck the trend and expand their dairy operation with a healthy dose of new technology. Pictured from left to right are Allan Hutchison, his daughter Kathy and her husband Rick Carl, his granddaughter Melissa and her husband Mike with their four children.

A few years ago, Cathy and Rick Carl moved from Cathy’s parents’ home farm on Zion Line to allow their daughter Melissa, her husband Mike Harrigan and their growing family to take their turn in the home that has been in Cathy’s family for generations.  Originally owned by her grandfather Ed, it was her parents’ home when she was growing up.  Its name Alona Farms is an abbreviation of her parents’ names Allan and Leona.

These days there is excitement on the farm as this young couple has decided to take the plunge and invest in their dairy production.  Encouraged by her family, Melissa and her husband are going against the current and expanding their Holstein herd from its current 60 milking cows to 140.  It requires building a new barn, a large manure pit and purchasing expensive new equipment.  While they do have four children, they will be relying on technology instead of child labour to make this expansion work. 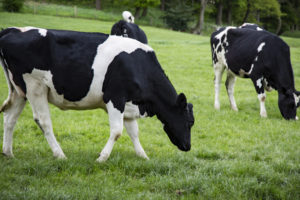 They are embracing robotic technology for the barn with the purchase of a DeLaval Volunteer Milking System (VMS).  Yes, that word means that the cows, not the farmer, decide when the animals will be milked.  The cows are attracted to the milking station by feed that is dispensed during the milking process.  Being creatures of habit, cattle figure out the connection very quickly.  While they are eating, the technology takes control of the milking process, cleaning, pre-milking, drying and stimulating each teat using a combination of water, compressed air and a vacuum, and that’s before the actual milking begins!  The cows are milked through a robotic attachment that scans their bellies, locates and checks the milk flow, and eventually releases the suction cup that collects the milk when the milking session is over.

According to the manufacturer, VMS improves the milk yield and is better for the cow, allowing them some control over their activities.  The equipment also monitors udder health and can detect potentially life-threatening mammary gland infections.  Finally, the firm suggests that the technology minimizes human intervention, which they suggest can be stressful for the animals.  It probably has the same impact on the farmers.

Before construction of the new barn goes beyond its foundations, construction of the 100’ manure pit must be finished.  After passing all of the regulatory hurdles, they are eager to see the walls of the barn go up, and the robot is on site waiting to be installed in its new home.  The barn is expected to be operational early next year.

In the face of supply management challenges, many dairy producers are going in a different direction, and Melissa is well aware that three of the four milk producers on Zion Line have recently shut down their dairy operations.  The Harrigans hope that following a contrarian path with pay dividends down the road, and while Melissa trembles a bit at the capital outlay to which they have committed, she is pleased that she and her husband are modernizing their farming operation and taking it in their own direction.

News of the decline in the number of farmers and the average age of those who remain may cause one to wonder if soon we will go hungry because there is no one left in the fields.  In our township, there are many examples of young farmers running farms such as Puddleduck and Circle Organic who are starting a new venture or families like the Harrigans and the Stevens of Millbrook and the Suurds, McCamus’, Winslows and Lamothe’s of Cavan who are finding their own ways to take their family farm into a new era. Whether they choose to embrace new technology or apply traditional techniques, their commitment ensures agriculture will remain a vital part of our future as well as our past.  KG