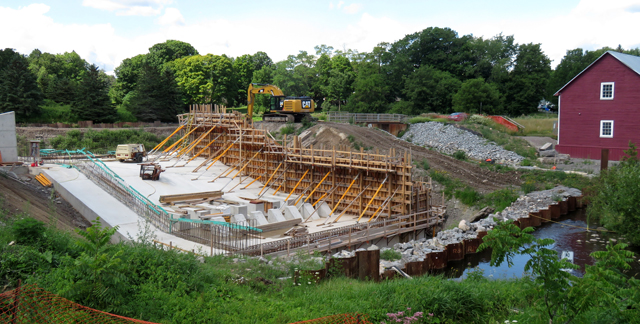 Photo Karen Graham. Lower deck of the dam spillway with baffle blocks to slow the velocity of the water as it runs through the spillway.

The Millbrook Dam project continues to hold its course, despite a two-week delay in April because of weather.  It remains on time and on budget, with the expected completion of early December.

Over the past few months, the contractor, Facca Inc., has been pouring the walls for the weir and the spillway. The dredging of the pond has also begun, beginning with an excavator that remains on the shore.  At the moment, they are pulling out silt to make room to drop a pontoon boat, roughly 11’ by 40’ – with an arm underneath the water which will pump out sediment onto one side of the pond.  The material will then “decant” overnight to allow water to seep away and reduce the weight of the material which will be trucked away.  The dredging phase is expected to continue for eight to ten weeks, and during this time access to the parkland will be even more restricted to allow the work to proceed expeditiously.  During the dredging phase, noise levels will be elevated due to the excavation and trucking activities.  Construction activity proceeds seven days a week from 7 am to 7 pm.

Meanwhile, construction on the spillway continues. As it gets closer to completion, the coffer dam at the bottom of the spillway will be removed. The final phase of the construction project will involve the installation of hardscaping on the earthen embankment of the dam and some landscaping. The project is expected to be completed by early December.

This ongoing inconvenience will be well worth it when the project is complete.  The renewed structure will provide critical public safety features including dramatically increased flow capacity and the elimination of underground seepage and erosion.  It will also allow visitors and residents to enjoy a beautiful natural setting where they can come together and celebrate our community in events such as the Fishing Derby, the Rubber Duck Race, and the Zucchini Festival, and perhaps some additional ones resurrected from the past such as a regatta.  Ideas, anyone?  KG