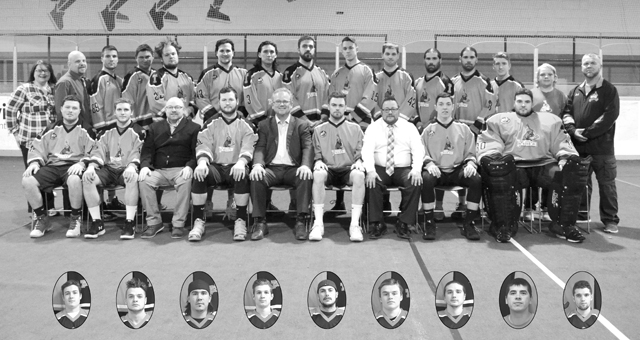 Photo supplied.
The Peterborough Timbermen lacrosse team is eager to begin playing at the Old Millbrook Arena scheduled to start on January 4th, 2020.

The Peterborough Timbermen are moving closer to home. After playing their first three seasons in Oshawa, Cavan Monaghan Council has formed an arrangement with Arena Lacrosse League Commissioner Paul St. John to allow the Timbermen to play their 2019-2020 season at the Millbrook Arena beginning this weekend.

This Arena Lacrosse League team (ALL) is an amateur winter indoor Development lacrosse league with teams based in Ontario, Canada. The ALL plays under professional rules including net size and players are 18 years of age and older.   Their objective is to provide a high level development league for players with pro ambitions.

Peterborough Timbermen have been playing in facilities in Oshawa, and hopes that their move to Millbrook will encourage more local lacrosse fan attendance, including new fans from the community.   Having never had the luxury of a home facility, coach Joe Sullivan hopes this move will help the team promote the sport during the winter months as they prepare for the 2020 ALL Championship.  Last season was their best, finishing in second place with a 9-5 record before falling to the Steelhawks in the quarter finals.

Ultimately, the team hopes the Millbrook Arena becomes a full time field house and permanent home for the Timbermen and its Junior ALL program during the fall and winter months.  There are very few full time dry pad arenas in the province, and even fewer equipped with turf.  Facilities like these are also sought out by soccer teams who train in local gymnasiums, including the Maple Leaf Cavan Football Club, who will also use the facilities for their competitive team practices during the winter season.

The Timbermen open their 2020 ALL season at Millbrook Arena on Saturday, January 4th at 3pm. Tickets will be available at the door for $10 for adults and $5 for children under 14.