Maybe It’s in the Ink 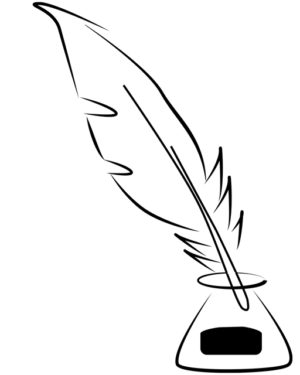 Last week I led a workshop titled “Speaking from the Heart.” The participants were people who read scripture during worship. We had a grand time talking about the many different translations of the Bible that are available to us today. We looked at the Inclusive Bible, that presents God without gender and makes sure that both men and women are included in the stories.

“Which translation is best?” someone asked. I was reminded of a wonderful book written by Edward Hayes titled St. George and the Dragon. In his book, Edward spins a story of God discussing with the angels, what would be the best way to tell people God’s message of love. During the discussion, God says, I’ve sent a number of messengers but few listened. One of the angels suggests that God write down the message in a book. “That sounds good,” God says, but which language will I use and which alphabet?” The angels have no answer for they know that whatever language, someone will feel left out. Finally, God says, “I’ve got it. I know what I’ll do. I’ll put my message in the ink. That’s it. When the message is in the ink it won’t matter the language or the alphabet.”

Hayes’ story is told to make us chuckle about our differences. And Yet there’s a part of me that thinks Edward Hayes may have stumbled onto a tiny bit of truth. For it really doesn’t matter the language or the religion. What matters is the message. We come to the Bible, God’s love letter to us, to each and every one, with our prejudices, our knowledge, our anger, our joy. Regardless of the translation, God speaks. Maybe if we thought God’s message was in the ink, we could let go of our wrangling over who is right. Maybe we could just listen for God’s message.