Where are they now?  Julie Olsen-Horton’s Great Slave Lake Adventure 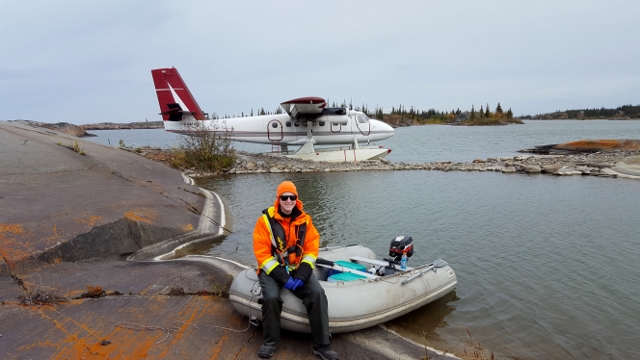 Photo supplied. Not the typical business trip: Julie Olsen-Horton travelled by twin otter to abandoned mine sites where she saw evidence of former inhabitants including temporary shelters and rusted mining equipment.

Growing up on Tapley ¼ Line, Julie always loved the outdoors, and was never squeamish about the creatures inhabiting their generous property.  After high school, she decided to develop her interests in a two year Ecosystems Management Technologist program at the Lindsay campus of Fleming College.  After some contract positions in Ontario and British Columbia, Julie landed a full time position at Arcadis Canada, an international environmental firm located in Port Hope, where she now holds a supervisory position. 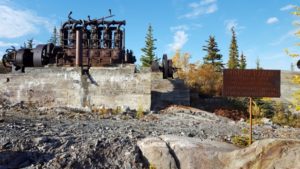 While she enjoys the office work accompanying her supervisory duties, she is equally comfortable in the homes and backyards of neighbourhoods in Port Hope, equipped with gadgets that make her look like a modern-day ghostbuster. Using gamma ray monitors, she and her colleagues perform soil samples in residential neighbourhoods to detect radiation emanating from the soil.   Her team conducts surveys as part of the Port Hope Area Initiative, an organization created through a joint agreement with the federal government and the municipalities of Clarington and Port Hope.  It was established after the discovery of low level radiation in the area years after the closing of local radioactive material refining and processing operations owned by Eldorado Nuclear Limited and its private sector predecessors, which performed radium and uranium refining from 1933 to 1988.  Now in their second surveying contract, Arcadis staff continues to test local properties to identify areas requiring remediation.  The project will conclude with the responsible remediation of any residual waste issues to allow residents to enjoy their neighbourhoods, with the eventual development of attractive park and waterfront area incorporating sporting fields, gardens, and green space. 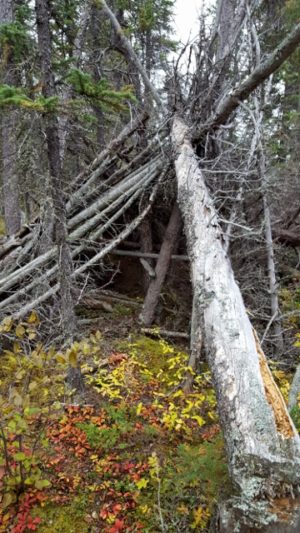 In October, Julie was on a different mission, which took her across the country to Yellowknife in the North West Territories.  From there she and her colleague boarded a twin otter each day to visit several abandoned mine locations over the course of a week.  Their job was to evaluate the site conditions to test local water supplies and ensure remediation actions taken in the past continue to be effective.

With the increasing awareness regarding environmental consequences of some commercial enterprises, this has become an important service, Aracadis is one of a handful of firms providing decommissioning, decontamination and demolition services to property owners seeking to address redundant, outdated and out-of-service industrial facilities.  Many examples of abandoned sites posing environmental risks exist in the north in the form of abandoned mines.  With the original corporate owners long gone, the remedial task is left to various levels of government. 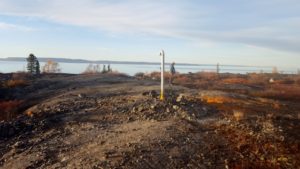 Outpost Island Mine was one of the sites Julie examined.  Located 94 kilometres southeast of Yellowknife, it was the site of gold and tungsten production for several years after the original discovery of gold in 1935. Gold, copper, and tungsten was extracted in WWII from 1941to 1942, when fluctuating tungsten prices made the mine unviable and it suddenly and unceremoniously closed its doors.  When the operating company Slave Lake Gold Mines failed, it left the workers and their families stranded on the island, with no pay and no transportation out.  Eventually the workers constructed a makeshift boat which allowed them to return to the mainland.  According to a sign on the island, the site was restored in 1994 under a program funded by the Arctic Environmental Strategy, as evidenced in the accompanying photo, the mining equipment remains on location.

Also on their list was a mine on Blanchet Island, which had a brief commercial existence, providing high-grade cobalt and nickel from 1969 to 1970.

Julie and her colleague were accompanied on their daily site visits by their pilot who helped them navigate the unfamiliar territory.  He also prepared meals including bannock and freshly caught fish cooked over a fire, and more importantly, ensured they had drinking water.  Although they were surrounded by water, much of it requires treatment due to the impact of the naturally-occurring acid of the rocks.   Also on the trip was a Wildlife Monitor equipped with a shotgun to protect them from possible unwanted interest from wildlife.

The timing of the trip also allowed Julie and her co-worker the opportunity to spend some time in Yellowknife taking in some tourist spots to give them a flavour for the lifestyle in the far north.  It was a fascinating excursion for the pair, and one they expect to repeat when the next inspection rolls around.  Julie is in a unique position where she is able to pursue a career in her area of expertise near her own neighbourhood, and working for an international company she also has the possibility of working in remote areas as there are no geographic barriers when it comes to environmental expertise.  KG