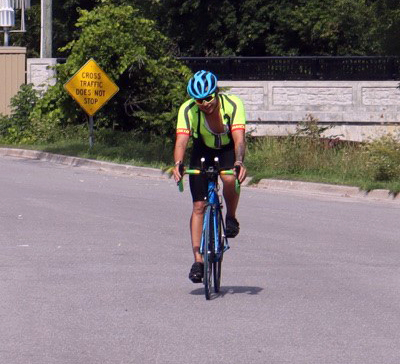 Photo Karen Graham.
Connor drops the bike and grabs his runners for the last leg of the Ironman competition.

Connor Als was four and a half months into his training when he heard the news that his race was cancelled.  Last year he had registered to compete in the Ironman Triathlon at Mount Tremblant, Quebec on August 23rd.  It is a grueling competition consisting of a 2.4-mile swim, a 112-mile bicycle ride and a 26.22-mile run, raced in that order, completed in 17 hours.  It is widely considered one of the most difficult one-day sporting events in the world.

He had been a week in a new job as Manager of Camping and Outdoor Education at the YMCA of Geneva park in Simcoe when things shut down.  When it became clear the shutdown was going to last, he and his wife moved in with Connor’s parents in Millbrook where Connor took stock.  With plenty of time on his hands, he mapped out a new training program in the area.  For the actual race, he sought to have a route that mimicked the terrain around Mount Tremblant to approximate the race that would have been….

Training for the swimming part was challenging with no pools open.  Connor hit Rice Lake from Bewdley on May 4th, wearing a wet suit, and by mid-June was back in Simcoe swimming Lake Couchiching.   Training would begin at 5 am for two hours and resume after work at 6pm.  He was getting in shape.

He returned to Millbrook for the actual race, which he performed on the same day as originally scheduled.  At 7 am, Connor began his swim of Rice Lake at Gores Landing, while his friends and family enjoyed a BBQ breakfast on the pier.  Conditions were perfect- the water was a shimmering sheet of glass.  Swimming in open water, it is difficult to keep on track, but he was accompanied in the water by his sister in a canoe.  In less than two hours, Connor was on his bike for the next leg of the journey.

One of the risks competitors face is over-hydrating, which can cause an imbalance in electrolytes.  Eager to avoid this issue, Connor restricted his fluids too much, and three hours into the bike ride his legs began to cramp.  His friend could see the muscles bulging from his vantage point in a car.  With pacers along the route encouraging him and ensuring he was not in physical danger, Connor swung around behind the old Millbrook Arena at 2:30 and handed his bike to a friend to complete the marathon that would complete the race.

During the following six hours, Connor experienced many highs and lows as he travelled local roads from Emily Park to Campbellcroft, wrapping up his race at his parents’ home on the outskirts of town in the dark.  He insisted on running the first and last 3km of the race alone.  His journey was completed in just over fifteen hours.

Connor is quick to point out that while it is a solitary endeavour, completing a triathlon requires support.  On race day, Connor had a crew of fifteen volunteers helping him out with nutrition stops, medical checkpoints and pacing his riding and running.  He could not have done it without them.  He hopes they will join him next summer in Tremblant when he hopes to run amongst competitors.  Congratulations, Connor!  KG