In 2022 Jupiter’s Moon Europa gets a Close-up Look 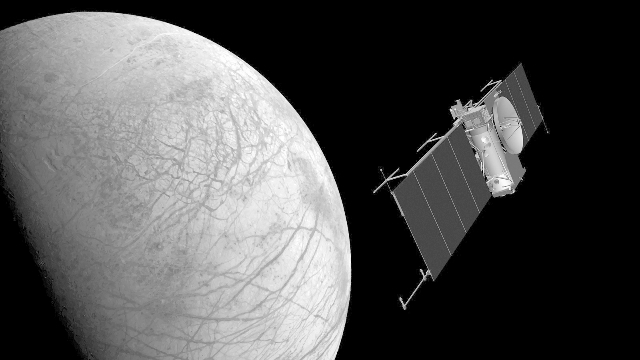 Could life exist in the ocean beneath Europa? On Earth ten-foot-long worms survive near 400º F volcanic towers where there is no light! We won’t know until we go. Artist’s mage is courtesy NASA/JPL.

In 1979 three scientists suggested that their might be oceans of water beneath Europa’s ice-cocooned surface. Since their article was published in Nature Magazine 37 years ago there have been numerous attempts to fund a mission to Europa, the second moon out from giant Jupiter. Now it looks like NASA and JPL (Jet Propulsion Laboratories) have been given the go-ahead for a rendezvous with our solar system’s “water wonder world”.

It has been NASA’s mantra to “follow the water” when searching for extraterrestrial life. Recent images from the Mars Reconnaissance Orbiter indicate that water still flows on the red planet. So we’re off to investigate Europa sometime in 2022.

The mission will inspect Europa’s crinkled-ice surface in great detail and set the stage for a touch down. Among the nine radiation-hardened instruments on board will be high-resolution imagers, ice-penetrating radar, and spectroscopy gear. So we will finally know what lies beneath Europa. If the evidence for life is strong, a touch down and perhaps a dive beneath the ice will follow.

Current data indicates that the ice on Europa’s surface may cover twice the amount of water as all of Earth’s oceans. In 2015 the Hubble Space Telescope imaged geysers of liquid blasting from beneath Europa’s surface. Plus the dark brown cracks on Europa’s surface have long been suspected to have been caused by whatever lies beneath.

These brownish trails could be because Europa’s volcanic neighbour, Io, has been spewing sodium into space. Some of sodium mist has been landing on Europa. Jupiter’s huge gravitational tug has cracked the ice on Europa and allowed the sodium to seep beneath it. Keep it up for a billion years and you’ve got a potential cocktail for life.

The Europa satellite will actually orbit Jupiter then swing out to loop around Europa. This will allow NASA/JPL to create a series of at least 45 elliptical orbits. They will skim the ice moon’s surface from a wide variety of locations as well as altitudes. The fly-by altitudes will vary from 24km to 2700km, so we will get some impressive close-ups of Europa as well as an impressive harvest of data.

NASA and JPL aren’t looking for life forms who make Super Bowl commercials and rubber boots. Even the lowest form of microbial life would be proof that we live in a solar system, galaxy and universe where life is thriving and evolving.