With steaming hot chocolate in hand and a fresh layer of snow on the ground, young hockey teams came together on Saturday in downtown Millbrook to celebrate the annual Hockey Day in Canada. As part of the community’s recognition of the day, 8 teams took part in a road hockey tournament organized by our municipal Economic Development Coordinator Brigid Ayotte as part of our local hockey celebrations. 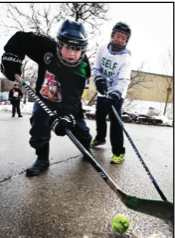 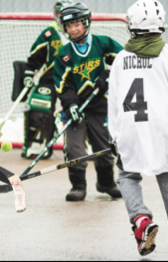 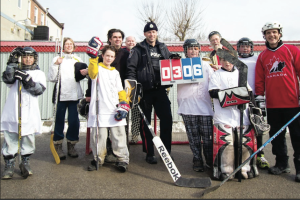 The teams were divided into two age categories. The younger team called The Dekes of Hazard, consisted of 7 to 9 year old players. This team competed against the formidable Fire Department and Millbrook Council, coming out in a victory in all three games played.

The teams in the older category consisted of payers from 10 to 12 years old and played in a 7 team consolation tournament. The winning team of the 2016 Hockey Day in Canada Tournament was the Baby Bruins with the Millbrook Grinders in second place and the Angry Pylons in third.

As per Millbrook tradition, The Baby Bruins then faced off against the Millbrook Council who defended their undefeated record from the previous year.

According to the organizer “The event grows every year and we still see a lot of excitement. Kids want to get involved”, Ayotte explained after the final game.

She also believes that it is a great event for young people who simply love the game or for those who don’t have the opportunity to play hockey on a regular basis. She adds that getting the local council and fire department involved helps to engage the community with a sport celebrated across the country.

With the help of many other local sponsors, the tournament was held in the shared parking lot of Home Hardware, the Masonic Lodge and the Legion. The Legion also provided breakfast, lunch and hot chocolate to help participants and spectators warm up after the games.

At the end of the day Ayotte expressed her satisfaction, saying that she was glad “the community can come together to celebrate our nation’s pastime”.