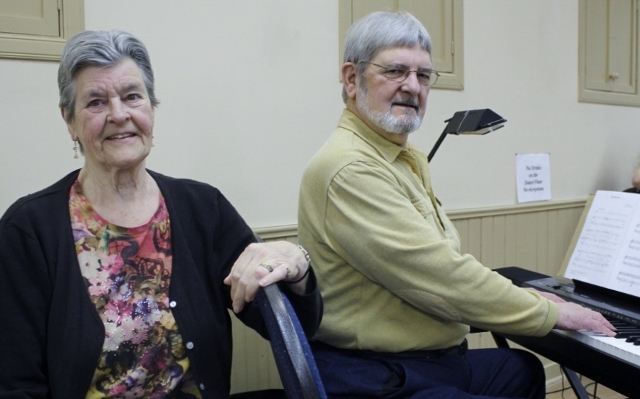 Photo supplied.
Jackie and David Franco were acknowledged for their resourceful and enthusiastic support since the organization’s inception.

Jackie and David Franco have been there since the inception, when a dozen people showed up for the first performance that was held in the gymnasium at the municipal office.

According to Jackie, there was so little in the room the sounds of the performance echoed around the room.  How things have changed!  The cast of this year’s production included 25 youngsters ages four to fourteen on stage, and audience numbers for some of the productions exceeded 100.  The participants came from near and far; one young lady made the trek for the weekly rehearsals which began in November all the way from Lakefield.  Some audience members also came

Whether the actors arrived with theatrical vision and poise or acquired it as the production unfolded, all made their stage entrances with smiles (where appropriate) and presence.

Characters in the original play directed by the author Shan McFadden of Cavan allowed for participation from a wide range of youth.  The parts included ones for the experienced participants as well as the uninitiated and initially intimidated.  Apparently as preparations progressed, some youngsters took creative license with their roles, embellishing them as they saw fit or “making them their own”.  Even the single-syllabled Thud portrayed by a four year old
embraced his role and delighted the audience with his enthusiasm.

Of course adults contributed to the performance, putting together props, organizing publicity and rehearsals.  The productions demonstrates the depth of creative talent that a youth theatrical group can draw and gives young people the opportunity to develop a confidence and stage presence that will distinguish them for many years to come.

The final production proved bittersweet, as founder Jackie Franco and her husband David have taken their final bows.  Over the years, Jackie has been the driving force behind this volunteer organization, sewing costumes, securing venues and running lines during rehearsals.   David has provided musical accompaniment for the productions, many of which have been musicals.   Their efforts have always been rewarding.  They have enjoyed watching the transformation of participants which in some instances has been dramatic as they gain confidence through their theatrical experience.  Jackie recalls one participant who was there at her mother’s insistence who asked to be placed in the back row when she arrived.  By the time the play was brought to the stage, this young girl had a solo performance of the Macarena!  Mission accomplished!

The Francos and others who have dedicated their efforts to our youth through this creative endeavour deserve our gratitude.  We hope the organization inspires others to pick up the reins and take Funfolk Theatricals to new levels. KG