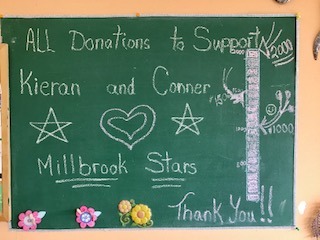 Cash and bottle return donations continue to pour in at Millbrook Farm and Pet Supply for Kieran and Connor and will be collected until the end of August.

Owner Angela Lloyd has been touched by some of the gestures from neighbours as well as strangers.  Kudos to the Millbrook Legion, an organization that is suffering during these times, who donated their returns for the boys.  A lady from Gores Landing called to see if someone would pick up her bottle returns.  Angela’s son made the trip which was more than worthwhile, adding up to an $80 donation.  As she notes, it’s heartwarming to see the goodness in people during this difficult times.  Amen to that!