The Millbrook Times » May 2017 » Facts about Earth so weird they’re, well…unearthly 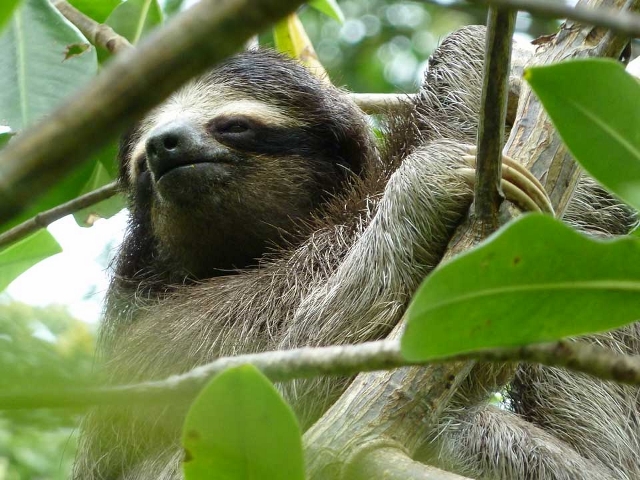 Photo Jakob Shokey.
A sloth’s claws are so strong that many are found still hanging from tree limbs long after the animal has expired.

I spend a lot of time blathering about the planets, galaxies and all sorts of weird stuff. Today’s article remains focused on the bazaar, only this time it’s closer to home – like planet Earth. What astounding tidbits and treasures have I uncovered? Here’s what’s up down here.

Let’s start at the beach where ocean researchers studying dolphins have deduced that these sea-dwelling mammals can not only communicate, but have names for each other. If they become any more human-like Wendy’s will start opening underwater restaurants. Next we get even closer to home – inside you.

It has been estimated that your body has a total of 96,000km (60,000 miles) of blood vessels in it. That’s enough to stretch around the world almost two and a half times. And while we’re talking about you, for one teeny-weeny split second in time you were the youngest person on Earth. Chances are someone in India or China was next in line.

Ever looked at your dog’s nose? Did you notice that funny patchwork of crossed markings? That’s your dog’s nose print and it’s just as unique as a human finger print. Imagine poor Lassie down at Station #5 having her nose-print taken. She was collared for hydrant hosing and walking without a license. So far there’s no word on cat snouts.

If you think the Earth is round, think about this. It’s actually oblate like some fat guy sat on your beach ball and it froze in that squished position. That’s because what we like to call solid ground isn’t solid at all. Earth’s surface is actually quite pliable. Toss in a little from centrifugal force from Earth’s rotation and it really is bigger when measured from east to west at the equator than when measured from north to south around the poles. So will Mother Earth still fit into her bikini this summer?

If you think your kids have short memories, be glad they’re not goldfish. The estimated memory span for these gilded little sea creatures is just 3 seconds. Makes me wonder how many times my wife has caught and released the same bass during the same hour, on the same day, on the same fishing trip.

Here’s good news for snail dentists everywhere. If your patients are one of a certain species of snail, they’ll have nearly 20,000 teeth. A visit to your office would rival Donald Trump’s annual income from just one country.

Turning the tables, let’s put the bite on the dentist. With 20,000 teeth to examine, how would she or he know the difference between a molar, a bicuspid or a canine? And imagine the cost of a full set of plastic clackers!