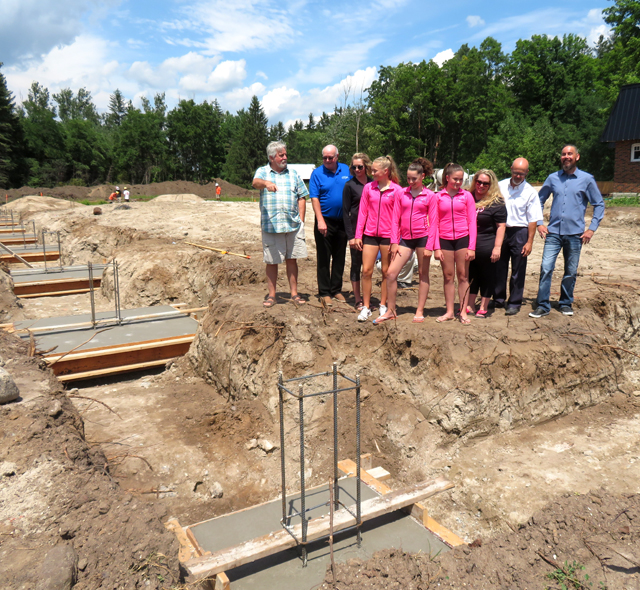 Marcel Rene began dreaming about building a new home for his popular gymnastics club on Lansdowne Street West in 2009.  He found what he thought was an ideal location just down the road across from Heron Landing Golf Course, and snapped it up, then walked into the Cavan Monaghan planning department to take the next step in his big dream.

Not so fast- the zoning on the plot was rural agricultural, so the planned use was not permissible under the Official Plan.  After almost nine years of planning discussions, opposition from neighbours, and wrangling with official plans, Rene finally received approval to proceed with the construction of this 18,000 square foot, state-of-the-art gymnastics facility in June.

Rene has been operating a gymnastics club for more than 50 years, most recently in a rented industrial building down the street where he has been for 27 years.  Over the last few years, he has had to turn would-be gymnasts away because he was operating at capacity.  With 400 recreational members and more than 100 competitive members coming multiple times per week, he estimates that he is currently providing training to the equivalent of 1000 gymnasts per week.

You might think that after 51 years in the business, Rene would be considering retirement.  Instead he is focused on creating a state of the art facility boasting equipment rarely seen in Canada.  Recently he installed state-of-the art air filtration equipment to remove air borne chalk and dust in his current location, which brings the added bonus of easing the locker-room odour that surprisingly results not from the athletes so much as from the chalk used to keep hands dry when using equipment. These items will move to the new facility, along with other state-of-the art training equipment.  At three times the size of the current facility, the new gym will include a 40’ by 60’ pit filled with foam and a tumbletrack and as well as a separate gym for younger gymnasts.  The existing home on the property has also been reconfigured for use by summer campers and visiting coaches and the second floor bedrooms allows Rene’s son and fellow coach Tien a prime vantage point from which to watch the new facility tale shape.

North Monaghan Councillor Tim Belch was a supporter of the project from the beginning.  While it contravened the requirements of the Official Plan, Belch saw the project as one that was consistent with current land use in the area and one that would serve the community.  Not only will it provide more recreational opportunities for young people, it will also create local jobs.

Rene explains that current club limitations stem from his current location’s capacity.  There are currently twenty-two coaches on staff at the club, but his new challenge will be to secure and train new staff to allow the club’s programs to expand to welcome new members.

Construction on the $2.5 million facility began last week, and the project scheduled for a January completion.  Rene is hoping for an early completion date so he can make a clean start in the 2019 program in their new digs.  That would be a welcome Christmas present. KG