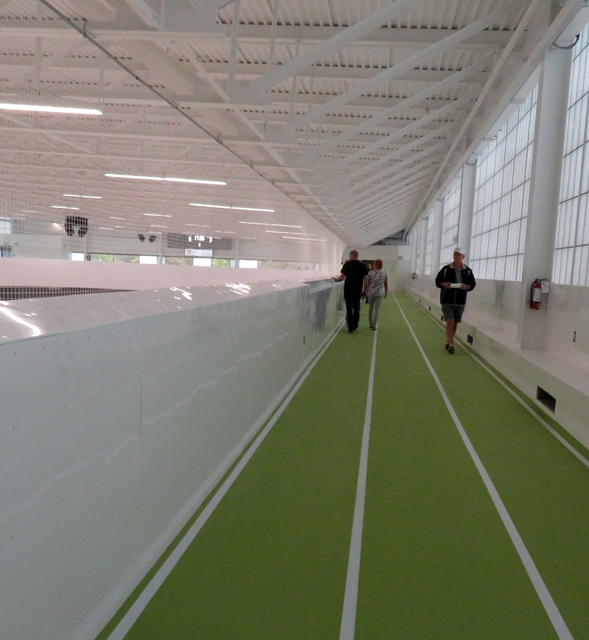 Photo Karen Graham.
Some indoor facilities including the ide and the running track are scheduled to re-open after Thanksgiving.

On October 13th, the ice surface and walking track will re-open by appointment only for Phase One.  In Phase 2, bookings for the additional facilities including the Community Hall, Studio Room, Meeting Room and Overlook Room will become available but the date for this has not yet been established.

Some residents have been impatient with the delay in this decision, after the province allowed multi-use facilities like this to re-open in July.  However it was not feasible for the township to reopen the CMCC because users groups were not prepared to book its facilities at that time.  Since then, regular ice user groups have been provided with the COVID operating guidelines and new ice allocations that include mandatory cleaning between user groups, to test their appetite for ice to see if opening the facility was viable.  Of the regular user groups, all but three groups are returning.  The ones who have not committed represent 4.5 hours of prime -time ice rental per week.  They cited issues such as later starts, restricted use of the change rooms and insurance requirements as the reasons for their decision.

The building hours of operation will not change but there are 28 few hours of ice being used in the forecast, and 30.5 hours dedicated to COVID required cleaning between each user group.

In his report, Supervisor of Parks and Facilities Chris Allison summarized preliminary estimates of the financial implications of reopening the facility.  Preliminary revenue estimates for the 2020-2021 season were based on current ice requests from traditional users only. The rentals do not include public skating or puck and stick events which are not yet permitted by the province.  Individual/one-time requests were also not included.

With a shorter season, fewer users and no individual bookings, the rental revenues are projected to reach roughly $140K, $18K less than the 2019-20 rentals. There is also no concession revenue in the forecast because it remains closed at this time.  Operating costs are forecast to be higher due to COVID cleaning $37K higher, but they have not been firmed up.

Recreation facilities such as Community Centres are never profit centres.  Their rates are subsidized and rentals are designed as a start to recover costs.  This is a more difficult time than usual in which to determine the financial implications of recreation facilities given new operating guidelines and staged openings.  Despite the financial concerns, most residents will be glad to see the lights on because the facility is being used, and not for security reasons.