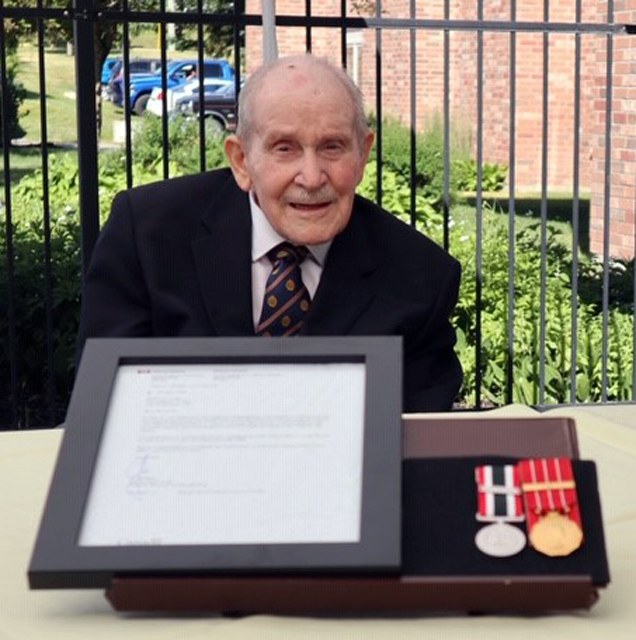 The presentation was originally scheduled for March 14th, but COVID had other plans.  Unaware of the pending honours, Gerald (Gerry) Coady was unperturbed, but others around him were disappointed.

On June 24th, Gerry’s son Kevin Coady, a former reservist and retired police officer, and David Rumball, a former captain in the Army reserve who served in the local regiment- the Hastings and Prince Edward branch, presented Gerry with a Special Service Medal for his North Atlantic Treaty Organization (NATO) service in Europe.  This award was established to recognize members of the Canadian Forces who take part in activities and operations under exceptional circumstances.

Currently a resident at Centennial Place along with his wife Kay, Gerry is a Canadian Air Force (CAF) veteran who served from 1959 to 1988, when he retired as Captain.  His military career began in Charlottetown, when he joined the Officer Training Corps in as a student at St. Dunstan’s University.  He eventually served in the CAF in many posts across Canada as well as in Europe.

In the 1960’s, Gerry’s military career took him to France and West Germany where he served with NATO.  These were challenging times in Europe.  The strain in the relations between Eastern and Western Bloc countries were symbolized by the construction of the Berlin Wall in 1961.  Cold War tensions between the US and the Soviets were mounting, and US military supremacy was threatened by Soviet nuclear progress, making the NATO security provision that “an armed attack against one member would be considered an attack against them all” take on new meaning.

While the event was allowed to proceed, COVID still had a say in the matter.  The presentation was held outdoors, and presenters were not allowed to pin the medal on its recipient.  Based on his expression, none of that mattered to Gerry.  Congratulations, and thank you for your service to our nation.  KG