Canada – who and what took its place in space 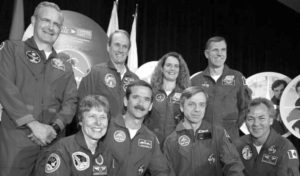 Photo supplied.
Since Marc Garneau was became our first astronaut on the ISS, seven more have followed. Next up will be David Saint Jacques in 2018.

Canada’s first astronomers weren’t called Canadians. They were the native peoples. For centuries they had been reading the northern skies to learn when to plant and when to harvest their crops. Like the Greeks and Romans their legends and history were written in the constellations they perceived in the star patterns above.

The first Canadian contributor to astronomy was Andrew Elvins who first founded the Royal Canadian Astronomical Society in 1868. The society eventually launched a comprehensive book on the night sky and has repeatedly updated it on a yearly basis. Today the 300+ page manual is used by amateur and professional astronomers around the world.

Leaping a few dozen decades ahead we were blessed with Dr. Helen Sawyer Hogg. Helen was the wife of Dr. Frank Hogg who headed up the David Dunlap Observatory. Helen had studied under – and eventually worked with – renowned astronomer Harlow Shapely. Helen also wrote an astronomy column for the Toronto Star.

Her outreach work via her newspaper column and public sessions at the Dunlap Observatory brought hundreds of Canadians closer to the stars.

No list of Canadian contributions to space exploration would be complete without mentioning The Canadarms – 1 and 2. They were built by Spar Aerospace near Toronto. Canada’s additions to the International Space Station made external repairs, cargo loading, capturing and repairing satellites possible.

Roberta Bondar had the honour of becoming the second Canadian in space and Canada’s first woman in space. In 1992 she lifted off on the Discovery Space Shuttle and spent eight days orbiting the Earth. During that time she was the prime payload specialist and used her photographic skills imaging Earth from space. Once back on the ground she promoted women in science and became Chancellor of Trent University. She also is an Officer in the Order of Canada and holds 22 honourary degrees from various institutions.

Astronaut Chris Hadfield was not only the first Canadian to walk in space and live aboard the International Space Station (ISS), but the first Canuck to be its Commander. In all he spent 166 days aboard the ISS and nearly 15 hours on space walks.

Widely remembered for his numerous “Tweets” from the ISS and a litany of fascinating videos aboard the ISS, Hadfield really did bring outer space down to Earth.

His rendition of David Bowie’s “Space Oddity” sung from the ISS will remain a classic along with his book “An Astronaut’s Guide to Life on Earth”.