Building a Different Kind of Bank for the Future 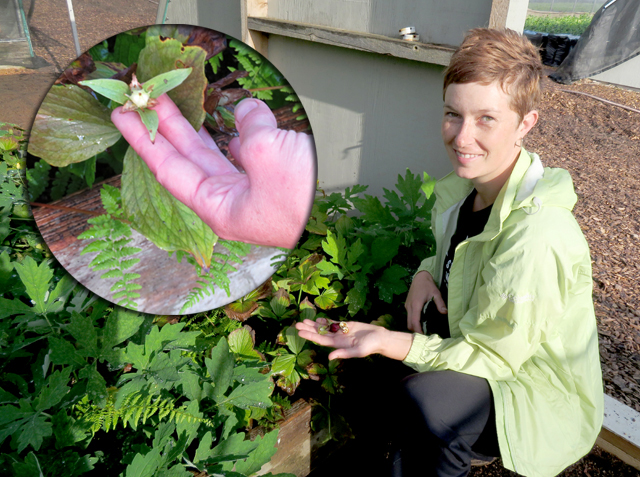 You might call it an occupational hazard, but these days everywhere she looks, Melissa Spearing sees seeds.  The obsession has been known to have her stop at the side of the road to take samples or photographs.  Her interests don’t stop at seeds, either.  She has even stopped at a residential construction site with a bed of trilliums that were about to be removed and sought permission to rescue and relocate them.  They are now thriving in her nursery bed, producing offspring.

Growing up in a family business in horticulture, Melissa was surrounded by plant propagation in her parent’s nursery operation on the outskirts of Bethany called Groundcovers Unlimited.  Parents Ted and Sandy established this perennial stock nursery on Ted’s family farm after completing their studies at the Niagara Parks School of Horticulture, and in 1986 expanded the business to its current location.

At first Melissa resisted the obvious temptation to join the family business and spent some time in Toronto in marketing.   The excitement of the city soon fizzled and after taking a weekend seed collecting course, she developed her own path in the industry growing native trees from seed.  She took the horticulture program at Niagara and from there started to take things in her own direction.  She experimented with custom root pruning pots to facilitate plant transplanting, took up garlic growing on a significant scale, and focused her interests on native tree and shrub production.

With the threat of climate change, seed banks are becoming common to defend against threats to our food supply.  The issue of biodiversity extends to our landscape, and Melissa is one of a handful of experts working to increase the supply of seed for native and endangered trees and shrubs.  She works with the Forest Gene Conservation Association (FCGA), a non-profit, genetic resource management corporation, with individual and group members who are involved in southcentral Ontario forest conservation and management.  It was established to conserve the native genetic diversity of urban and rural forests and address challenges from development, agricultural land use, invasive species and climate change.  Melissa worked on their white pine seed orchard program and seed collection training.  She authored components of their revised field manual, “Seeds of Ontario Trees & Shrubs” which offers photographic and practical tips for collecting many native and important restoration species.  The organization will begin offering Certified Seed Collector workshops this fall in partnership with Forests Ontario for those interested learning more about seed crop forecasting and seed collection.

She has also participated in seed conservation training at the Millennium Seed Bank in Wakehurst, England.  This organization is the world leader in the conservation of wild plant species and in 2009 became the first location in the world to have preserved the botanical heritage of its nation. With around one in five plant species estimated to be threatened with extinction worldwide, seed banks are a cost-effective means of long-term conservation. Seeds are dried and frozen, providing a safety net against species’ extinction in the wild, and a valuable resource for research into major world issues including food security, disease, climate change and biodiversity loss.

Closer to home, Melissa has taken courses at the National Tree Seed Centre in Fredericton, New Brunswick, where they collect, process, test and store the seeds of Canadian tree and shrub species for conservation and research purposes.

Melissa sees Ontario trilliums as prime examples of the “seed circle of life”, where plants rely on each other to coexist.  Trilliums thrive under mature tree overstories, blooming in early spring before the trees above them leaf out.  As the floral emblem of Ontario, trilliums are protected on conservation authority and provincial park property only.  The popular misconception that it is illegal to pick the flower has helped the delicate plant survive, as it requires seven years to develop from seed to flower, and is pollinated by insects instead of wind.

Travelling to seed banks is exciting and stimulating, but Melissa finds ways to apply her extensive knowledge in her family business where she is extending the plant list to include more Ontario species from local seed sources, and taking on a more active role in business management.  Her everyday efforts to protect and preserve native species is evidence of her commitment to the mantra “Think globally, act locally”.