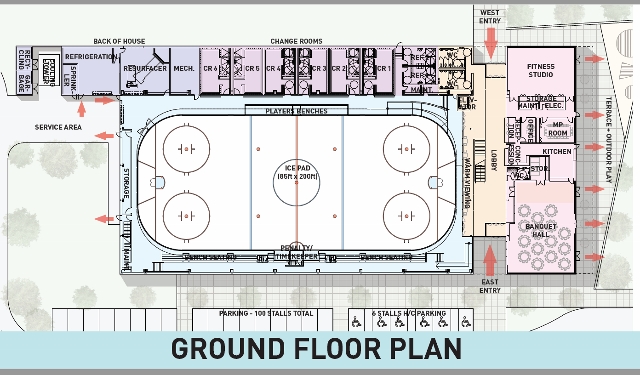 On June 6, 2017, a Public Information Centre meeting was held at the Township offices that included a presentation from Community Centre Architects MacLennan Jaunkaln Miller Architects (MJMA).  After the presentation, residents could review the project specifics as illustrated on design boards on display, and engage in direct discussion with the design architects, Township staff, members of Council and the community centre’s Project Manager Mary Gallop.  Amongst the roughly 15 residents who came for the meeting, the topic of most concern was the amount of storage available in the kitchen area.

The numbers of attendees were lower than expected partly because other key stakeholders are participating in their own Community Stakeholder Committee which had already met with the architects to communicate their interests.  In addition the architects have received input from the Technical Advisory Committee (TAC) and feedback from both groups led them to the refined design that was presented that evening for public input.  Some of the changes included adding an ATM, vending machines and trophy case in the lobby.   The second referee room was also enlarged to create a dedicated girls change room.

Planned to maximize the use of natural light, the lobby is a large, continuous corridor stretching the length of the building.  Among the highlights of the plan are the NHL size ice pad, six change rooms, and a three lane, elevated running track above the ice surface.  In addition to its athletic uses, the track could provide additional spectator capacity and would have a net for protection.

The primary community space is a banquet hall with seating capacity for 150 at banquet tables with additional room for a dance floor.  A warming kitchen equipped for use by caterers and other hosts will provide fridges, dishwashers and warming ovens with serving access to the banquet space as well as an outdoor terrace to the north of the building.  There is also a fitness studio with sprung hardwood floors and storage space for equipment owned by users groups.  There will be a concession area, some office space and plenty of room for mechanical equipment.

Energy efficient use of modern technology will ensure that the building makes use of heat generated by the ice-making process will be redirected to heat the building.

With the conceptual stage nearing completion, the process will now move to the development of working drawings.  The tender for the project construction is expected to be issues In December  or January, followed by a 18-19 month construction period with a tentative occupancy date of September 2019.  KG