Another Page in the History of Needler’s Mill 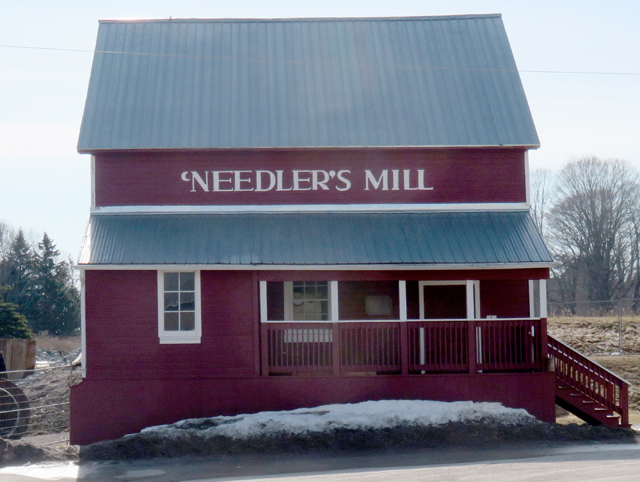 Photo Karen Graham.
The Mill now has pride of place with a fresh coat of paint on a new firm foundation.

They did it! Last week, the papers were signed, officially transferring ownership of Needler’s Mill to the hands of the Millbrook and Cavan Historical Society from the Otonabee Regional Conservation Authority which had assumed responsibility for the landmark in 1967.

As the building fell further into a state of disrepair during ORCA’s ownership, the community rallied around it.  The Millbrook and Cavan Historical Society was formed in part to preserve the building, and completed its first restoration of the grist and saw mills in the late 1970’s.  In 2015 alarm bells sounded again when Otonabee Conservation declared mills surplus to their needs and the municipality declared the building unsafe, putting its survival in jeopardy once again.  A new plan was needed, and fast.

One of the most onerous tasks was finding the funds to complete the project, and in that they needed a lot of help. 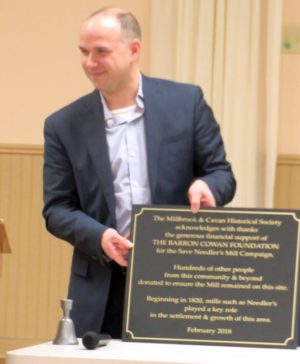 Photo Karen Graham.
Daniel Cowan acknowledges a plaque recognizing the donation provided by the family foundation in support of the Mill project.

The group received its first big boost from the Barron Cowan Foundation.  This is a private foundation out of Peterborough established by Barron Cowan, a former resident of the area.  Representing the organization at Thursday’s celebration was Daniel Cowan, who attended Rollin’ Acres in Cedar Valley in his youth, along with his young family.  Daniel explained that the donation provided his children with a visible reminder of the importance of investing in the future of one’s community.  The donation got things moving, making the $90,000+ fundraising goal look doable, and the community piled on.

There were t-shirt, print and book sales, but the major local fundraising effort took the form of an art sale held at St. Thomas Anglican Church.  This event was spearheaded by Grace Glass, Esperanca Melo and Bill Slavin, but as Grace explains in her letter to the editor this month, it was a true community event.  The fundraising goal was surpassed.

With the funds in place, Rob Jackson and Alex Bushell developed a budget to get the work completed, with other volunteers sourcing contractors, obtaining quotes and working closely with the township’s Chief Building Inspector, Kyle Phillips  ORCA’s Dan Marinigh.  Volunteer project managers David Hobson and Alex Bushell were on call almost every day for two years, making daily site visits during the construction to ensure the project would meet all the requirements. 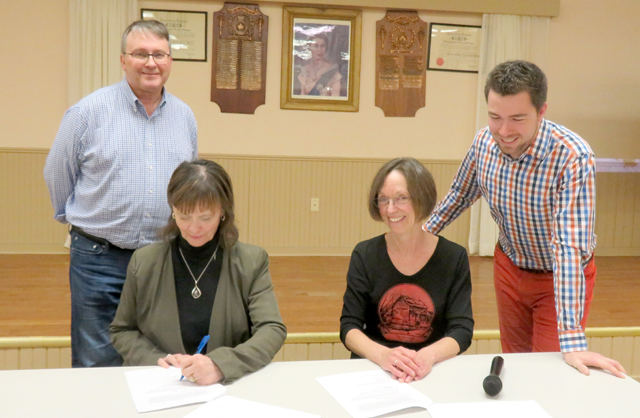 Photo Karen Graham. ORCA Vice Chair Sherry Senis and Chief Administrator Dan Marinigh join members of the Millbrook and Cavan Historical Society Celia Hunter and Alex Bushell to sign documents that transfer ownership of the renovated and relocated Needler’s Mill to the local organization. After gargantuan efforts spearheaded by Celia and members of the DamMillPond group, all hurdles were crossed, granting the historic structure a new lease on life as a memorial to the community’s past. For their valiant efforts, Historical Society will be recognized with a Heritage Preservation Award on March 5th. A well-deserved honour.

Needler’s Mill is now considered a monument, with no public access to the interior.  The next step is to develop interpretive plaques to be mounted on the building’s exterior that will outline the history of this iconic building and its role in building the community in which it holds a place of honour and affection.

With the Mill project complete and the Dam project underway, Millbrook could conceivably consider referring to itself as “The Village that Could”.  Congratulations to all involved, and to Celia in particular.  Well done! KG