DANGER: These space oddities may fry your loaf

Here’s some Martian big talk that’ll amaze you. The red planet may be only half the size of Earth, but its now-dormant volcano, Olympus Mons has no short comings. The humongous mountain is 1.5 times as high as Mt. Everest. That makes it 13km high verses Mt. Everest at just over 8km. Were it on Earth, Olympus Mons would punch into our stratosphere.

But height isn’t its only claim to fame. The base of Olympus Mons is nearly the as large as the country of Spain. Small wonder it is considered to be the largest mountain currently known to exist in our solar system. But the big stuff doesn’t end there. Let’s travel back to planet Earth.

It is estimated that when measured by mass, mammals, fish and birds add up to 10% of the life forms on Earth. The other 90% is made up of bugs. Yetch! While we’re in bug-land here on Earth, let’s peek inside your tummy.

It was once estimated that there are 10 times as many bacteria in the human gut as there were cells in the adult human body. Since 2014 the estimated ratio has been scaled down to 3:1 in favour of bacteria. Nonetheless, that still posts the final tally at 30 trillion bacteria. Next we rocket out to our solar system again.

The Sun is about 1 million times the size of Earth. If you could cut the Sun open and scrape its innards out like you do a pumpkin at Halloween, there would be room inside the Sun for Earth and our Moon to orbit around Earth – without ever touching the inside walls. But the Sun is just a peewee when it comes to star size.

Top dog among stars is CY Canis Majoris. It’s in Canis Major, the hunting dog that follows Orion the hunter across the winter sky. This stellar goliath would extend out to the orbit of Jupiter if placed at the centre of our solar system. Beside it our Sun would be barely visible. That’s because VY Canis Majoris is 1,500 times larger than our Sun.

So what’s the largest exoplanet yet discovered?

A journey into deep space reveals that the big boy is a real whopper. Going by the highly romantic name of HD 100546 b, this exoplanet currently tops the list at nearly 7 times the size of Jupiter. And how big is Jupiter you ask? You could take all the other planets and moons in our solar system and stuff them inside Jupiter with room left over. It is so large that it is almost big enough to be considered a brown dwarf star.

Recent calculations indicate that our “observable universe” could be twice as large as was once thought. That would bring its size up to 90 million light years across containing an estimated 100 billion galaxies. But astronomers think that our universe is actually bigger than that. But who’s counting? 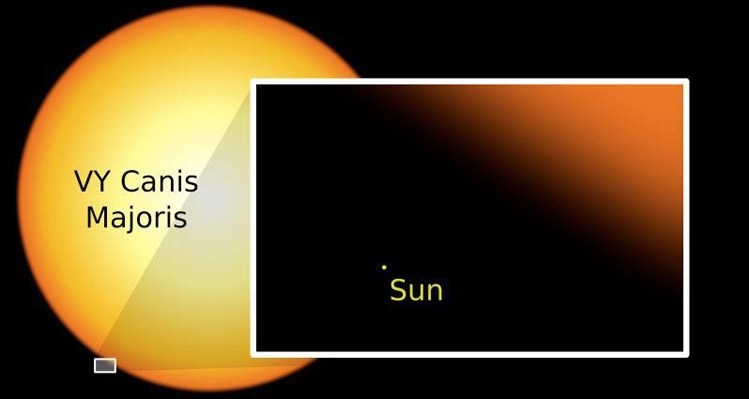 If you want to wish big, wish on a big star. Here’s a comparison between our host star, the Sun and VY Canis Majoris. Feeling small?